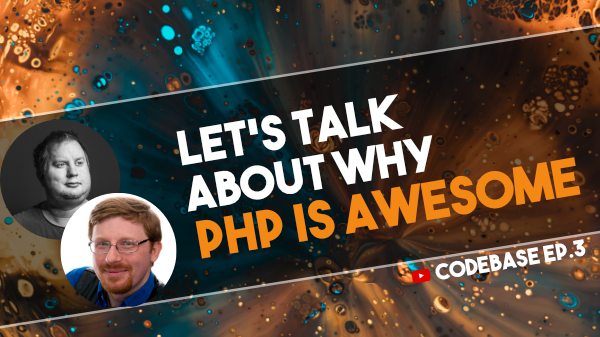 codebase is a new developer community show on Youtube. It's a celebration of technology and different people working with different technologies. Each episode, I'm joined by a guest who knows something I don't. Together we chat about life and technology.

In the third episode of the codebase, aired live on May 25th, I had the pleasure to discuss the colorful history and current state (and a bit of the future) of PHP with Larry Garfield. He is a staff engineer at TYPO3 and has been working with PHP for over 20 years, has written a couple of books on the topic (Thinking Functionally in PHP and Exploring PHP 8.0). His fascinating background with PHP turned our discussion into not only a great history lesson but also insights from how the languge has evolved and why many people have a very outdated view of PHP based on the state the language and the ecosystem was in early 2000s.

If you want to know when new episodes of codebase come out, subscribe to the Youtube channel.

In the turn of the millenia and early 2000s, PHP was a language that was so easily accessible to many developers that it took a huge part of the market share for building backend code. Pretty much every web host allowed for PHP so it ended up being used by a lot of people – me included. PHP was my first serious programming language and I ended up building so many sites and small web apps with it.

One interesting story Larry told during the discussion was about the GoPHP5 project which was a collaboration between multiple PHP framework communities to push for requiring PHP5 so that web hosts would have incentive and need to upgrade their servers to PHP5.

We also had a nice short discussion about PHP's package manager Composer and what it does right and how it's hold up its place in the PHP ecosystem.

Finally, we discussed the current state of PHP with PHP 8.0 with some live code examples and even saw a glimpse of the future as Larry demoed upcoming Enums feature that he's been contributing to and which is coming in PHP 8.1.

How to get started with PHP?

PHP the Right Way is a great resource for learning about the basics and finding references to many of the core features of the language.

PHP Manual is in my opinion one of the best technical documentations I've ever used. One thing that sets it apart from many other resources is the combination of authored documentation and community use case examples.

If you missed our PHP discussion, you can watch it on Youtube. I also recommend checking out our previous episodes in which we talked about accessibility using HTML and CSS and backend development with Clojure.

I'll see you next time!