Does it make sense to finish what you started? 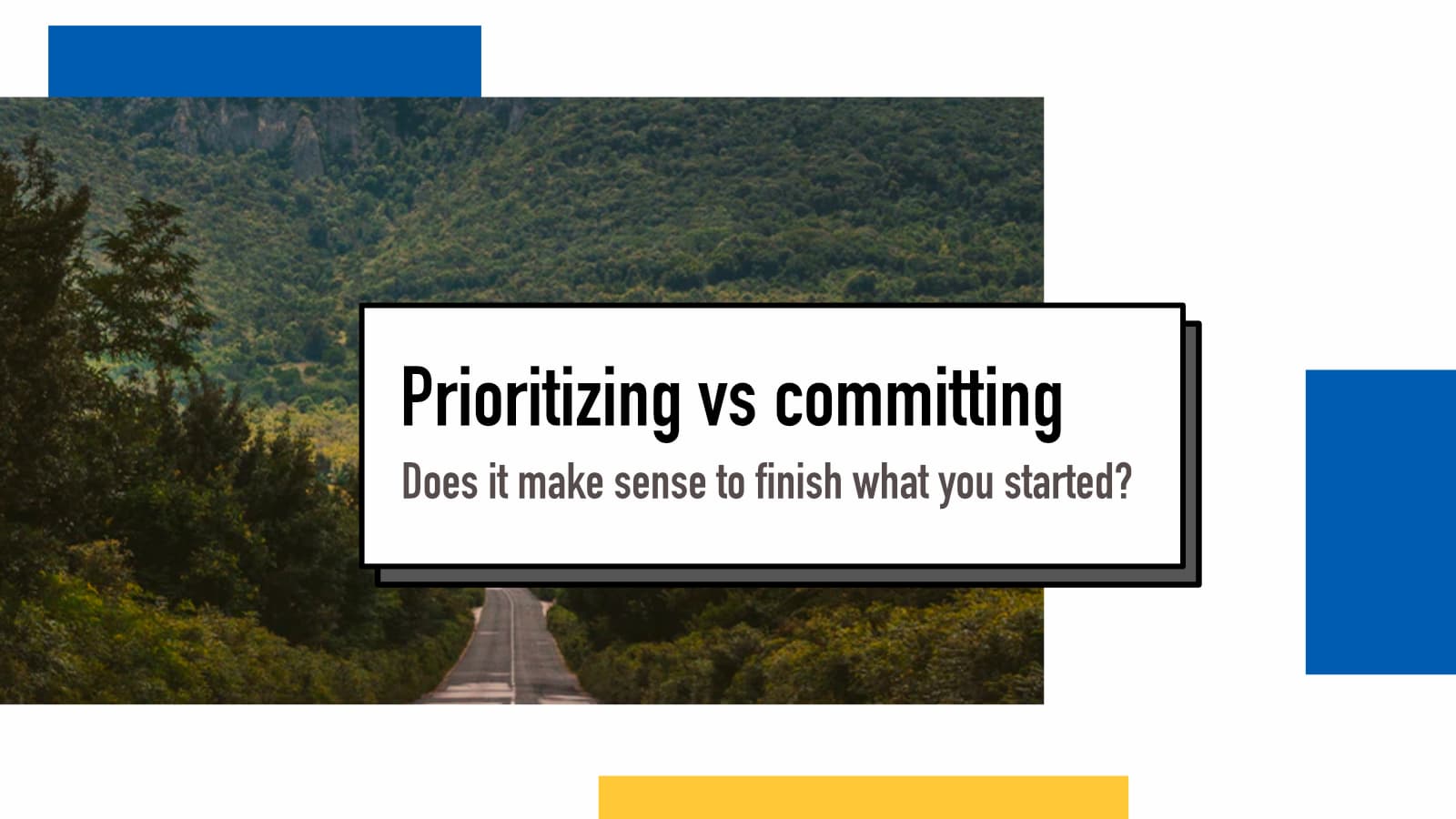 I'm a university dropout – three times actually. It's not a brag or something that defines me but it's something that comes up in the discussions quite often. There are two main reasons for why I never finished my studies:

Let's talk about these two.

First of all, this blog post is not a degree vs no degree discussion. There's definitely value in finishing your studies and in most fields, it's necessary. I happen to live in Finland and work in tech, a combo that means I can get quite far without a degree.

This discussion is about an argument I hear over and over again when discussing this topic with people: should you finish what you started? And especially the common case of adding for the sake of it at the end of that sentence.

A tale of trade-offs

The argument usually goes like this: "A thesis is a good way to show you can stick to what you started and finish it, even if it is not that valuable itself." And I absolutely agree with that: it definitely shows commitment and ability to push through something you might not enjoy doing, kudos for you.

However, that's only one half of the coin. And the other half, you'll only find out if you ask the person you're talking with because there are so many different reasons.

For me, it was a clear question of priorities. At the time I last tried to write my thesis, I was working full time at a non-profit startup community hosting workshops and running startup accelerator programs. I was also teaching programming, organizing meetups and other events and doing what I consider more impactful and meaningful than writing a thesis that only my thesis supervisor (and maybe my mom) would read.

I made a concious decision that I wanted to spend my days and evenings doing something that mattered to people. Many of those people who participated in those workshops are now either entrepreneurs or software developers – or both. That's an impact my thesis would have never gotten. And it's time that would have had to be cut if I wanted to finish my thesis.

Most of the time, the decision we make on how we use our time is a trade-off. We choose to do one over the other and I was lucky to be in a situation where my other option was much better.

But is it even a good idea to commit and finish?

After I tell the above to someone, it's quite common to hear "yeah but your case is different, usually...". Which I'd say is a cop out. There's something even more valuable to discuss though. I would argue, that the idea that it's (nearly) always a virtue to finish what you started, is a flawed one. Not only does it cause people spend years studying something they realize in their first year is not their thing or working on job they hate – because they started it and quitting is bad.

If you're a business owner or employer and you've hired someone who then starts doing a long project (either on their own or because you told them to) and it turns out 20% into the project that it's not gonna be worth it. Maybe there's something else they could do that's more valuable to the business or maybe what they are doing is harmful.

Would you still like them to "stick to what they started and show they can finish it"?

I don't find it valuable to continue doing something if there's a better option, just because you started it and need to show you can do it. Time is a very limited resource and wasting it doing something nobody gets anything out of, is just plain stupid.

I experiment a lot

I've always been the guy who starts a lot of different projects and initiatives. As I was growing up, I got told about it a lot because I didn't finish most of them and I still don't.

Luckily, in adult life it's called experimentation and is actually very valuable. Sometimes my project dies after I buy the domain, sometimes I run it for a few months only to realize it's not what I want to spend time on. And then there are the gems. The things I run for 5, 10, 15 years. Because they are the ones worth doing.

And if I had stuck with the first thing I tried, I would have never discovered those things. I ran a local sport thing for 15 years, my proudest creation Turku ❤️ Frontend turned 5 last December. A newsletter at work that I created and operate is gonna hit its 2nd anniversary in the summer. And my newest creation, codebase has been running for 2 months already.

But yeah, I never wrote that thesis so I guess that shows I lack commitment. Or maybe you can ask any of those people who became developers after learning programming if I made the right call.