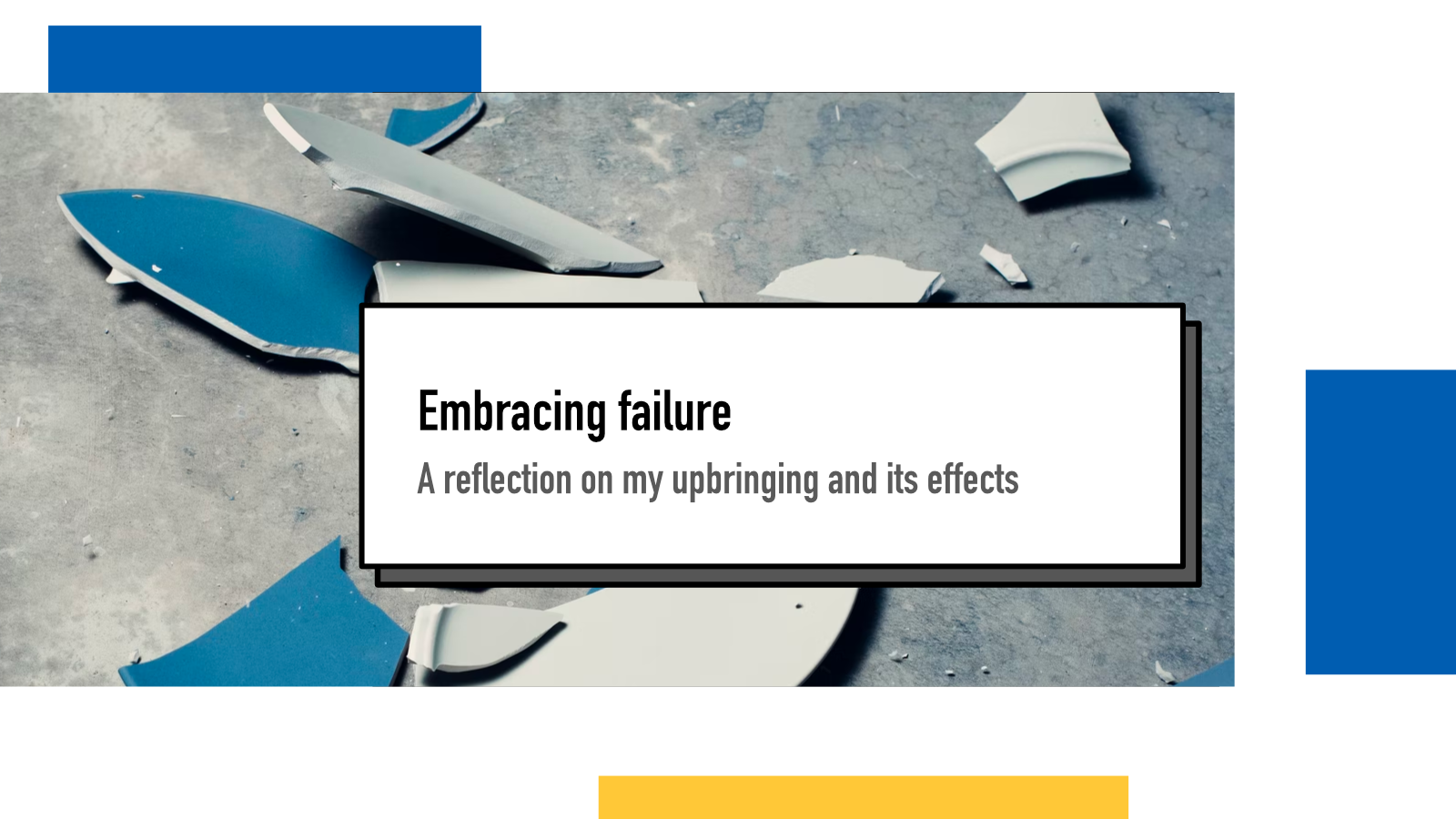 I've been thinking about my relationship with failure a lot lately. That process has been inspired by a combination of Rach Smith's recent It's okay for me to be wrong, spending time in my childhood home reflecting my upbringing and moving to a new country to start a new job.

I grew up in a loving family but in an environment where experimenting and failing wasn't really encouraged but rather actively disparaged. Whether at home or at elementary school, the expectation always seemed to succeed at the first try – or be scolded for not succeeding.

I remember very little of "no worries, you tried! let's try again and see if we can learn from it" mentality from my childhood. I'd try something and if it didn't go well, I'd move on to something else because clearly I wasn't good enough for the initial thing.

That led to me, in my teenage years and even early adulthood to avoiding everything I wasn't already great at. And that probably set me back for a good decade on many things and had an everlasting negative impact on my self-esteem – one that I still haven't figured out.

I really wish now that as a child, I would have gotten more encouragement and support for failing because it would have very likely made my self-esteem healthier and it would have led to me learning much more early on.

It was during my university years when I started hanging out with the local startup people that I started to unlearn that old mindset of mine and adopting a new one. One of experimentation, learning in public, and excitedly moving towards new things no matter how good I might be at them in the beginning.

This blogging and public speaking endeavour has definitely been one. Building communities has been another one. And the adventurous mindset of not worrying too much about practical things and just moving forward and figuring things out. If at first I don't succeed, usually I'll get another chance and even help from people when I dare to ask.

The biggest influence to that change in my mindset was spending more and more time with people who already had and lived through that perspective. People who weren't afraid to fail, who looked at each new adventure as an opportunity to learn. By through social osmosis, I slowly started to do the same. In an environment where most people were open to failure, it even started to feel like I'm losing out on something if I keep avoiding those opportunities just because I'm afraid of failing.

Of course, there are many levels of failure, some more significant in impact than others. It's a different thing to risk and lose all of your money if you need to pay mortgage and take care of your family than it is to risk burning a few potatoes when you're trying a new recipe.

I have noticed that this is what makes the general discussion of failure so challenging. When you hear the startup mantra of "fail fast, fail often", some think of the mortgage, some the potatoes. To me, the whole idea is that it's better and safer to fail early when the stakes are small – and not when failure eventually means losing everything. But it also means that one can fail many more times on the path to mastery or figuring out what one wants to do.

It ain't ever easy

Even though I wrote this post about how I learned to embrace failure, it needs to be said that it's by no means easy. Everytime I start something new, I'm terrified of failing: starting a new job, moving to a new country, joining a new social club or anything else.

I guess the mindset shift has been mostly to do those things regardless of the fear.