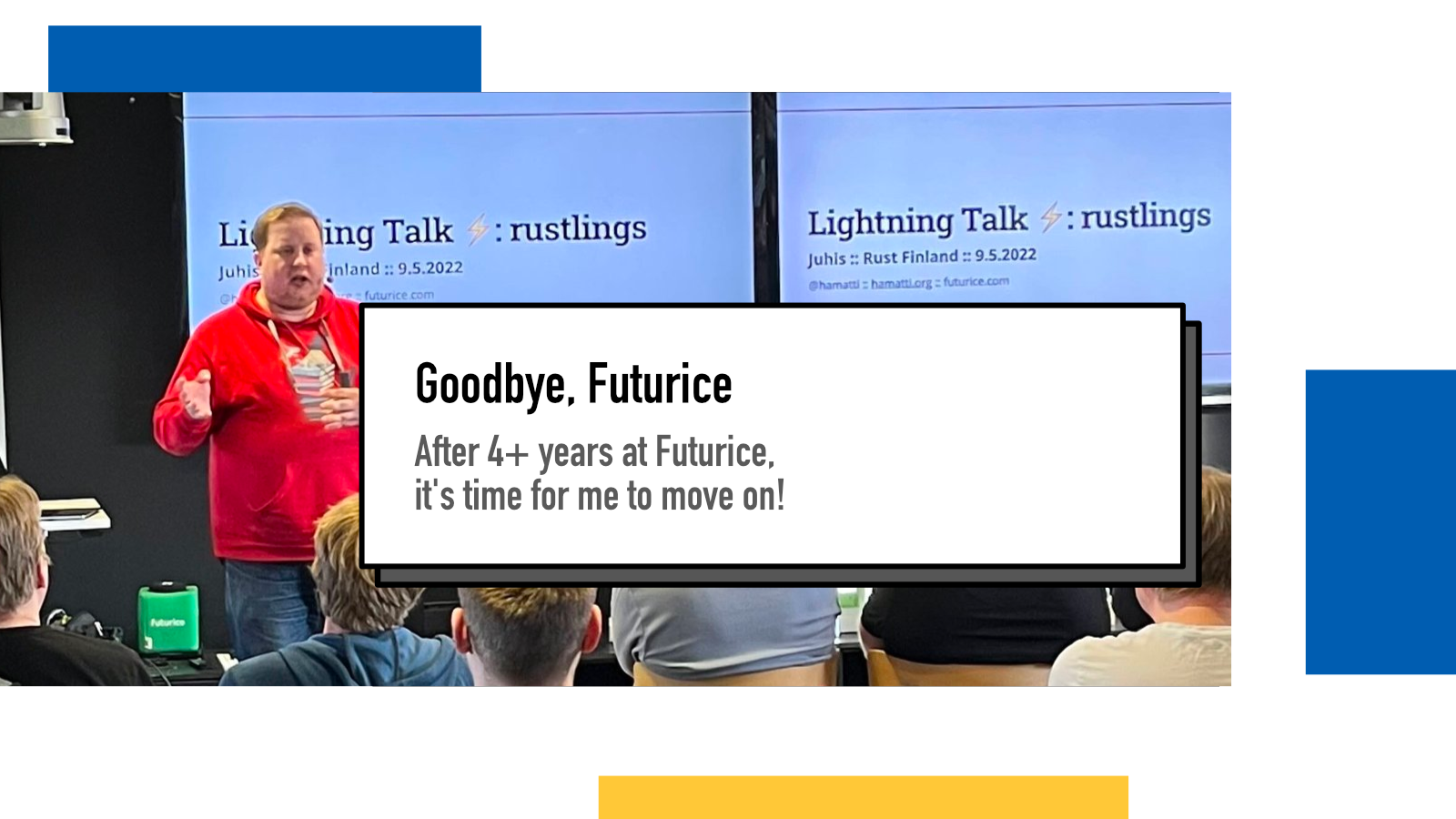 Time for some personal news. It's time for me to say goodbye to Futurice after a bit over 4 years. A lot has happened and a lot has changed over these 4+ years and I like retrospectives so here's one.

What I'll be doing next, you might ask? I'll share that a bit later but I'll be leaving Finland and embarking on a very exciting next adventure that'll challenge me in all new ways. I'm both excited and terrified.

I did quite a lot of fun and challenging stuff over these years, here are some of my personal highlights:

It's no secret that for a lot of people, me included, the people are the best part of working at Futurice. I got to work with – and more importantly become friends with – a lot of amazing people, absolute superstars professionally and some of the kindest humans I've ever met. With some, we only worked for a short time, with some I got to work with for the full 4 years.

One of the best parts of my role was that I got to work with almost everyone: developers, designers, marketing, recruitment, human care – both in Helsinki and globally. And especially the ability to learn from all these really top notch professionals in their own fields.

And it's not just for the fun stuff. A great friend and a co-worker is one that travels to the office with cinnamon buns when I'm having a mental breakdown and crying in the corner of a meeting room. Or a supervisor who day after day, week after week, and year after year is always there to support me through all the good and bad. Or friends coming together for a birthday lunch to celebrate the fun days.

When I joined Futurice in the spring of 2018, I had already been running Turku ❤️ Frontend for a few years and it was quite a dream come true for me to be able to run an internal weekly meetup, also known as Tech Weeklies. I ended up doing 12 talks + hosting a bunch of jam sessions in addition to MC'ing somewhere between 100-150 sessions during these four years.

One thing that makes me happy was being able to help new people practice public speaking, get excited about it and even become meetup and conference speakers. Seeing people grow like that is so rewarding.

A small but incredibly impactful part of Futurice's culture that I want to bring with me to wherever I go is the Jolt culture. Named after Jolt Cola, Jolt is the culture of giving public thanks and positive feedback to colleagues. Not only during performance reviews or formal occasions but during the everyday work.

We had a Jolt emoji in Slack, a huge never-ending roll of paper hanging in the wall and a station of goodies - stickers, candies, cards and other tokens of appreciation - that we were encouraged to use to build an environment where we remember to say the good things that often are left unsaid. Every day when you come to the office, you can see the roll of paper filled with written thank yous by colleagues and Slack is full of wonderful messages of thanks and public praise.

I had never experienced that anywhere else before and I don't want to ever work without something like that again so who ever I end up working with in my life in the future, you can be sure I'll bring the Jolts with me.

Another highlight is the Dev Breakfast newsletter we started in the summer of 2019 and I got to run it for full 3 years before leaving. A monthly developer newsletter which also gave us an opportunity to highlight the great people I worked with and share a very diverse view of what is interesting to developers.

Dev Breakfast got a friend in 2022 when the company launched Design Breakfast which to me was a strong sign that we had built something great with the developer newsletter.

One thing is for sure, I'll be continuing to subscribe to both of them after I leave.

Global Code Camp brought together developers (and some designers) for an internal weekend hackathon. It was a long tradition at Futurice and my first one as an organizer was in 2019 when we went to Tallinn with ~35 Futuriceans. We hacked on AR/voice recognition/image recognition etc technologies and had a blast in the best event space in Tallinn.

Our plan for 2020 was to go to Mathildedal to hack with alpacas but then the pandemic threw in a lot of problems and we postponed to 2021, then 2022 and now I don't get to see the alpacahack. But it did strengthen a lot of friendships and did create a inside hype with Futupaca stickers.

I've always loved to work with students (my previous job being running a student startup community at Boost Turku and another previous job and on-going hobby being teaching programming) so being team member at the beginning and for the past 3 years leading the Futurice's Student Event Force was an awesome opportunity.

Tons of student events and opportunities to help students learn something new, to get in touch with experienced developers in the industry and so on. And we did a really really good job, as evident from constant top results in surveys like YPAI and Universum; one highlight there being that we beat Google as the most desired workplace amongst young professionals in 2020 for the first time (finished 2nd in the survey).

Student Event Force was also a really great opportunity to experiment with things and to be proactively involved in the student community. I have so many fond memories from late evenings at the office sitting down and having great discussions with students.

I also got to lecture at the university, host workshops at the office as part of different university programs and courses, and a ton of other stuff.

Especially I wanna say hi and thanks to my favorites, Athene, Atkins and Hive. Everything that I got to do with you was so much fun. ❤️

Open source communities have long been close to my heart and at Futurice I got to do so much in this space. Our Spice Program fell into my hands at some point and I got to inspire people to contribute to open source and share their work – as well as log a lot of Spice Hours for my own projects too.

Annually we had really good events during Hacktoberfest and even though my goal of eventually having a Hacktoberfest event in each of our offices didn't come to reality, the ones we had were fun. Best was 2019 when we had one-day hack days in Helsinki and Tampere and a meetup in Munich.

And in 2019, when Ricardo N Feliciano launched concept called DocsThusrday, I really wanted to get involved and we organized a couple of afterwork sessions for discussing about open source, documentation and worked on different projects.

Over these years I got to host a lot of different meetups at our office, helping local communities to organize events. Hundreds of people came, learned, got inspired and left with a smile on their faces from these developer gatherings. The pandemic threw a wrench in those for a while and we experimented with bad success with some online events that didn't really do the magic.

To mention a few I had great memories from: Rust Finland, Python Helsinki, HelsinkiJS, Google Developer Group Helsinki, Azure & Friends, AWS User Group Finland, codebar, Helsinki Clojure meetup, Clojurebridge, Account Management meetup, React Helsinki, React Finland, Service Design Network, DotNeat, Elm meetup, Tampere.NET are some of the events we hosted or sponsored and there are so many additional ones where I got to speak or otherwise represent the company.

And during my time at Futurice I started new community thing myself too. Helsinki Dev Lunch became the one lunch each month that I looked forward to.

And when the pandemic kept local events at bay, I got to experiment with codebase livestreams.

I need to pack my life into a backpack (so excited for that), sell/donate some stuff from my apartment, enjoy summer holiday season and then take the ferry and the train to some new adventures.

I'll be reading a few books, catching up with friends and family, watering a few potatoes in the field and relax for a while before in August new fresh start.