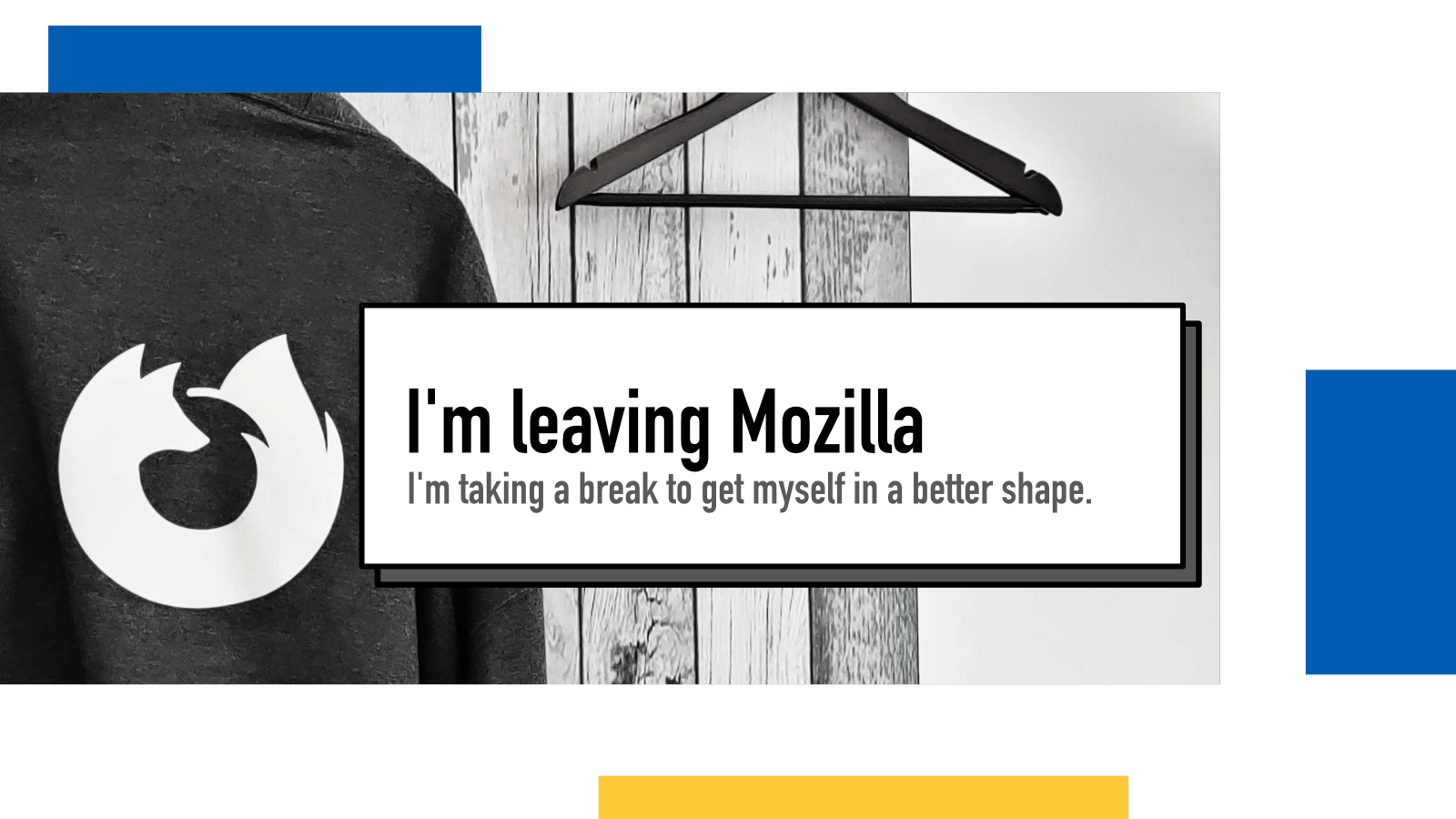 I resigned from Mozilla.

When I first heard about this Developer Advocate position at Mozilla in March of 2022, it got me interested. Discussing it with a friend who already worked at Mozilla got me excited and the interview process, while not perfect and without its flaws, convinced me that the Firefox Add-ons team at Mozilla was one I wanted to join.

I finally found a job that enabled me to move to Berlin. So I packed up my bags, resigned from my old job, moved to Berlin and started fresh. For a while, it was magical.

On paper, everything was great. Mozilla is one of those companies that has a mission I truly believe in, it's full of great people who are passionate about the things that I was passionate about and the opportunities in community building for the add-ons developers were plentiful and challenging.

The only thing that wasn't great was me.

Have you ever played a board or video game where, if you run out of resources, you could pay the required cost with another resource but with a higher cost of 2-to-1 or 3-to-1? Maybe you haven't but that's the best analogue I could come up with how I feel.

For half a decade, I've been pushing myself hard and pretty much living and working at the far edges of the comfort zone. I've achieved a lot of stuff I could have never dreamed of. But it has all happened at the expense. Now it's payback time. I've run out of resources to pay the cost.

I've been mentally overwhelmed and exhausted since 2014 or 2015 on a constant pace. I've always found that little bit of extra energy somewhere. Even a few burnouts didn't stop me, even though they should have. I was always worried – and to be honest, still am – about succeeding at work. So I've kept pushing and pushing.

My physical health is not great. I've gained a lot of weight over the years because I ate badly and ordered takeaway daily because I needed all the mental energy to battle the feeling of being overwhelmed. I've gone weeks without proper sleep because of all the stress as I've been scraping the bottom of the barrel just to keep my head above the water at work life. It turns out, I can't do that forever. Who would have guessed?

Often, I have quoted the great talk by Randy Pausch:

Brick walls are there for a reason. They are there to let you show how much you want something.

I'm starting to feel, that this time, the brick wall is there for me to have something to lean on while I rest.

I'm packing my bags and moving back home. I'm now looking for a job in Turku and I would like to find a job where I could be a cog in the machinery, so to speak. I don't have the capacity to every day come up with new ideas, implement them and justify them to the leadership so most community positions are unfortunately out of the window.

I would like to find a team where I could put my software development skills to a good use while not having too many responsibilities. I want to join an in-house team (no consulting or lead positions) where I can build software and maybe help juniors while doing that. I'm mostly comfortable with Javascript, Python and PHP.

And all the other energy I'll direct to getting my life back on track. Finding ways to recover and to build healthy day-to-day habits. To cook, to go for walks, to spend time with friends.

I will keep organizing Turku ❤️ Frontend meetups and running the Syntax Error newsletter but mostly everything else will be on a hold until I've gotten better.