My trip to Django Day Copenhagen 2022 and Stockholm 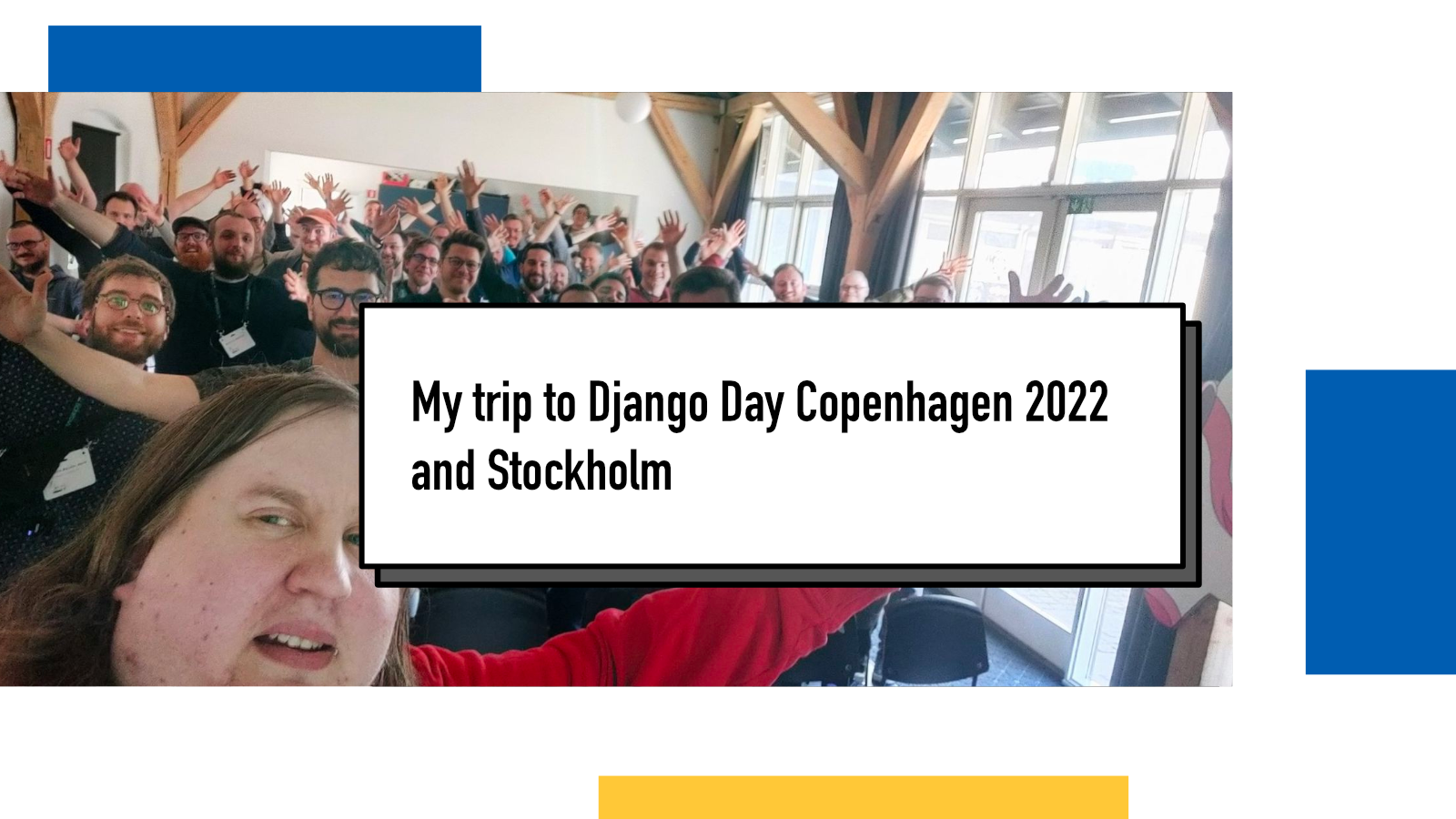 Django Day Copenhagen on April 8th 2022 was my first trip after the beginning of the pandemic and a return to a conference where I spoke remotely in 2020. Before the trip, I was slightly worried because the past two years of burnout and anxiety meant it could either be a really good trip that helps me recover or added stress to already large mountain of personal problems. Spoilers: it turned out to be the first.

As a non-flyer, my trips to conferences and meetups abroad are always an adventure. This time though, it went smoother than ever before. The ferry from Helsinki to Stockholm was super smooth cruising (which was lucky because I get seasick very easily) and the train from Stockholm to Copenhagen actually went all the way to Copenhagen which was a nice surprise after so many times it not doing that.

The evening before the conference, we met with some fellow speakers Marijke, Paolo, Joseph and Michael for a lovely dinner. A dinner on the evening before the conference is one of my favorite things to do and it's a great way to connect with fellow speakers and participants. In previous conferences we had a great dinner in PyCon Estonia and also in PyCon Sweden. Also PyCon CZ had a great one but I was so nervous with my first international conference that I didn't take any pictures.

As a good example of how small the developer world is, it turned out that Michael had seen me speak in PyCon Sweden in 2019!

We also learned that most kitchens close at 21 in Copenhagen which caught us by surprise and we ended up roaming around the town for a long time before we found Hereford Beefstouw and got served really good steaks.

Already in 2020, even though my participation being remote, I got a really good sense of a lovely community and knew immediately back then that I wanted to make a trip to Copenhagen as soon as possible. And I wasn't disappointed with what I got.

The conference had 9 talks + 5 lightning talks and I feel like there was a really nice balance and combination of different type of talks.

Paolo opened the event with a nice talk about his journey with Python and Django and the communities. There were so many parallels to my journey in developer communities and I just ended up nodding along throughout most of the talk thinking to myself: "Yup, that's a great point".

Mike followed up with a talk about 12-factor app and how following those guidelines helped their company migrate 10k databases to a newer version with minimal issues and downtime. Real-life cases are always fascinating and it was great to hear how to apply the principles into a project and see results.

The third talk of the day was by Wilhelm from Kolo. I felt like his talk was a really nice complementary view into similar things as what I talked about but with a different perspective and different solutions. He talked about Kolo, a tool that integrates into VS Code and helps understand (and debug) HTTP requests in Django apps.

Fourth we learned about WireMock and how to do end-to-end tests with Django using WireMock's mocking abilities. Rômulo did a great job showcasing how to do it with a Minecraft server management app.

Django's ORM is very powerful and good tool but Joseph walked us through how inefficient SQL queries you can sometimes create if you're not paying attention and how important it is to not only understand SQL as Django developers but also to keep it in mind when developing solutions with the ORM. He showed how to profile and analyze the calls and what different ways there are in the ORM to create more efficient queries without having to resort to RawSQL.

As my slot was closing in and I got more nervous, I was unfortunately only able to follow Mariusz's migration talk with one eye and ear.

My talk was about debugging Django. As I've helped a lot of developers from first-timers and juniors to seniors, I've noticed a lot of inefficient patterns and even a lot of guesswork in most people's approaches to debugging. I talked about general mindset things as well as some tools that can help you become efficient debugging your Django application.

And I got to introduce this community to a favorite of mine: Friday Hugs. I got a nice addition to my collection to remember this conference forever. You can see my collection of Friday Hugs in Twitter.

And I finally got the Django Day Copenhagen cake I had been waiting for since 2020. In a beautiful spring weather no less.

Recovering my talk and the release of my nervousness, I completely missed Johannes' talk about distributing Django projects via Ubuntu Snap.

The last talk of the day was Marijke's wonderful talk about onboarding and setting up new developers for success. She made so many great points about building psychological safety, about the culture of feedback and encouragement in teams, about documentation and many other things. This was another talk where I was just nodding throughout the talk and thinking: "Yup, that's it!".

Another favorite of mine in tech conferences are lightning talks. I always aim to make a quick & fun talk that lets people laugh a bit at the end of a long day. In this conference, I talked about the wild wild world of different software version systems. It was based on a blog post of mine from last fall and went through 22 slides in 4 minutes. And I managed to make most of the audience laugh for most of the 4 minutes so that was a success!

Other lightning talks saw Rômulo showcase how to unit test functions that use decorators, Benjamin talk about Wagtail and its localization capabilities, Jon talk about job hunting and how to find what you're interested in and finally Paolo inviting us all to PyCon Italia this June. Awesome lightning talks all around!

First of all, I wanna thank the organizing team and especially Benjamin and Emil for organizing such a wonderful conference and building such a lovely and welcoming community. Everything was spot on and I had really good time throughout the event. As a speaker, I felt taken care of before and during the event in a way that made it super easy for me to focus on the most important thing: having a good time with people.

Thanks to all the fellow speakers, it was so great to get to know you before, during and after the conference ❤️. Meeting people who share a passion is by far the best part of developer communities and the reason why I spend most of my work and free time around them.

To all the participants as well! I think I managed to chat with almost everyone during the event. And meeting everyone from Team Best Bird and finishing second in the Django Pub Quiz was a lovely finish to the conference day itself.

As I mentioned in the beginning, I didn't know beforehand if this would help me recover or throw me deeper into despair. I'm so happy it was the first one. I haven't been able to really relax and recover in two years but this trip definitely did it for me. I've slept better than in a long long time and I've been able to put away my stress and focus on having a good time, traveling and hanging out with the best people.

I dedicated the Saturday for relaxation and self-care which was abruptly interrupted as I woke up from an accidental nap when the fire alarm went off and I had to run down from 8th floor as the hotel was being evacuated. Luckily it seemed to be just a false alarm and the hotel didn't burn down. It's incredible what a rush of adrenaline can achieve.

The next Django Day Copenhagen is planned for March of 2023 and if you are a Django developer with a possibility to travel to Copenhagen for the event, I can not recommend the event enough. It was a brilliant experience in a well-organized event with amazing people.

Or if you're not a Django developer, maybe I can interest you with React Finland that we're organizing in September 12-16th in Helsinki or Euruko 2022, October 13-14th also in Helsinki? Both of those conferences have ticket sales open right now and I'd like to see you there.

Coincidentally my fourth work anniversary at Futurice also landed on this weekend and visiting Copenhagen, there was only one way to celebrate: immortalizing myself as a LEGO.

There has been a lot of ups and downs in the relationship between me and the company over the years but this weekend was a really good reminder of why I love what I do for a living and how privileged and lucky I've been to get here.

And a bit of Stockholm too!

On my way home, I stopped by in Stockholm for a few days to visit our new Stockholm office, to catch up with old friends and to meet so many colleagues face-to-face for the first time after a few years of becoming friends over video calls.

In 2019, I was visiting PyCon Sweden and a friend introduced me to Mr. Cake cafe. So when I returned to Stockholm for the first time since, I just knew I had to visit that again. Last time, the huuuuge American pancakes with ice cream defeated me and this year catching up with an old friend, the caramel cake had the same effect.

I'm so lucky I get to work (and enjoy life) with such amazing people. Thanks to all the Stockholm colleagues who made my visit such a great one.

The benefits of remote work

Whenever the discussion of remote work comes up, these kind of trips are the big reason why I'm an advocate for it in my life. For me it's not about working from home: it's about being able to work from anywhere so I can spend more time traveling or spending time with friends as the work can be adjusted to the situation.

In addition to the work stuff I did at the conference and at our Stockholm office, I was able to do full work days remotely from trains, hotels and offices thanks to the power of the Internet. I can have meetings to Finland and Germany, do internal comms in Slack, do external comms with partners and especially during the low-internet moments in trains and ferries, I got a lot of documentation written – although I learned to my detriment that editing a Confluence page requires constant internet connection which was a bit of an inconvenience.