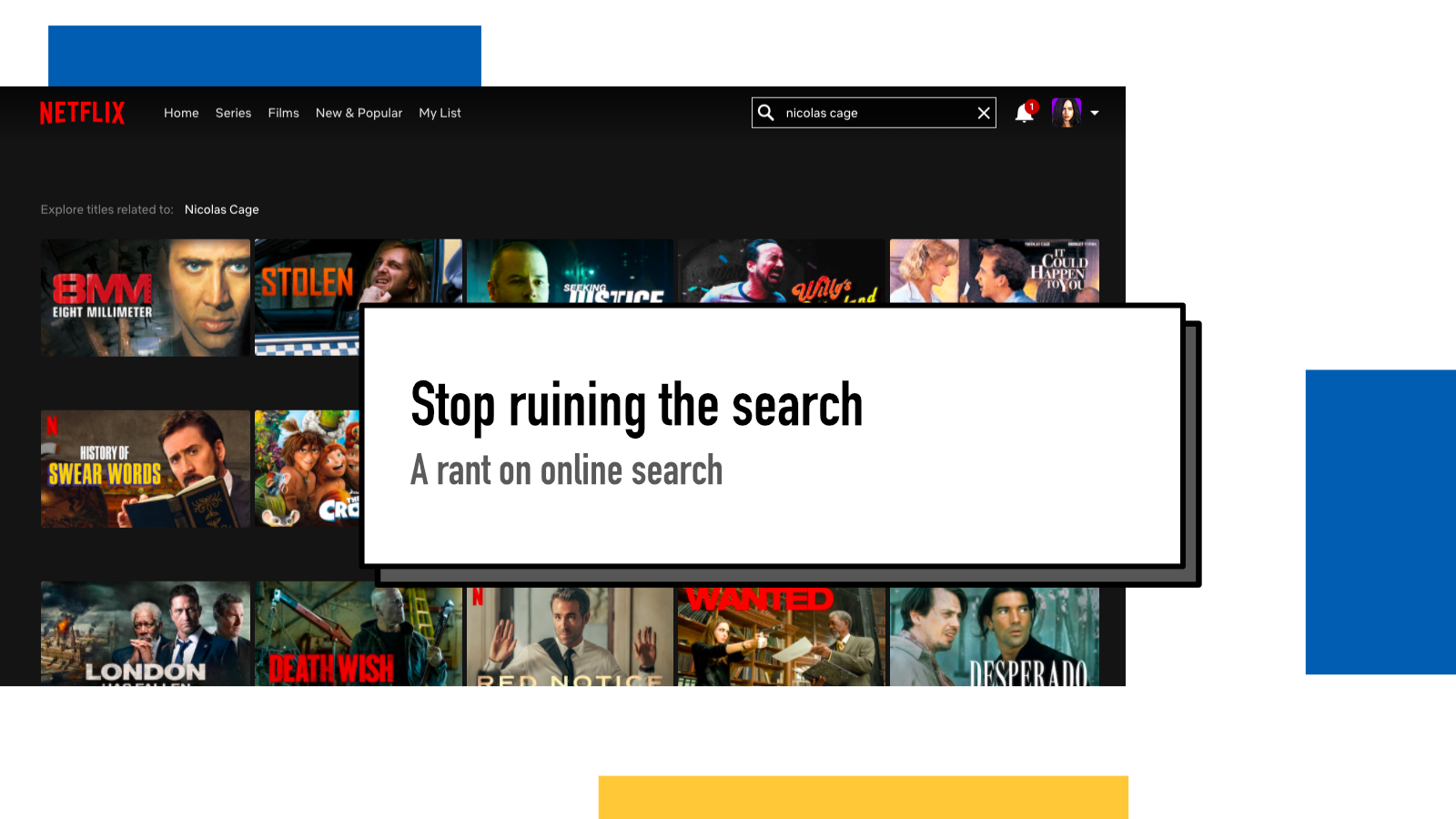 Search is one of those features that have gained so much from the evolution of technology, from machine learning and the industry's skills in building efficient systems.

But over the past few years or so, I think we've crossed past the line of improvements and tipped over to start going backwards. And it has nothing do with skills or abilities of developers involved but rather the fact that product people have stopped caring about building products with a user-first mentality and replaced it with a company-first mentality.

And that really pisses me off.

If you're not familiar with what I'm talking about, let's start by taking a look at Netflix. I've been a Netflix subscriber since it became available in Finland around 2011-2012.

Imagine for a moment it's Friday night. You want to relax by watching a movie by a great actor Nicolas Cage. You type it into the search box and – at least if you're like me – expect to get a list of movies starring Nic Cage.

First, we get a few movies starring mr. Cage as we'd expect but quite quickly we run into movies like The Da Vinci Code and The Book of Eli – neither which star Cage. And due to the way the Netflix UI is built, there's no indication of when the search transitions from showing search results into showing recommendations.

Netflix's search is not built to serve the user. Imagine having to check IMDB for every movie to see if the actor you searched is in it or not – after already having searched the streaming library for it.

And this is not due to the search engine accidentally thinking that the query Nicolas Cage somehow relates to these titles. It's purely showing you similar movies and series that it thinks you might enjoy.

There is a workaround for this problem when searching for specific actors: you can find a movie they are featured in, go into that movie's detail page and click their name in the actor list. This opens up an actor's page only showing movies featuring them.

So Netflix knows that they only have 7 movies starring Nicolas Cage but clearly are not confident enough that any of them would be interesting enough to keep me in the platform so in the search results view they try to make it look like they have way more content than they actually do.

Google got big and successful by building a search engine that was way better than anything else in the market. It has then become a big player that builds anything and its products like Gmail and Drive are notorious for having really badly functioning search (especially for a company known for its search).

However, they don't seem to be maliciously bad like Youtube's search these days. Youtube does a similar thing as Netflix but not quite as bad.

The reason it's not as bad as Netflix's search results is that at least it's telling me it's now showing something else. It also has similar sections for "People also watched" which is often more related but can still be something very different and "People also search for" which is often not very interesting and helpful.

It is still fundamentally ruining search as a functionality in favor of recommendation engines. Some growth hacker somewhere must be very proud looking into the data showing that their decision to ruin search is showing up as short-term increase in engagement on the platform.

The deep problem of engagement and recommendations

Even though in this post I merely talked about search, the problem has existed for a long time and search is just one of the newest victims of it. For years, social media platforms filter what you see, overriding what you have signaled you want to see by following or subscribing to content. Twitter tries to extend your feed by showing what people you follow like or showing random (well-performing) tweets on a topic you've engaged with in the past.

Some years ago, Instagram hid all the images you had already seen and show a "You're All Caught Up" banner. They initially said it was to encourage people to stop scrolling through Instagram, framing it as a mental health and well-being thing. It didn't take them long to start using it to their advantage again by showing "Suggested Posts" instead of the posts you as a user have decided you want to see. I'd rather see my friends' posts again than any of Instagram algorithm's recommendations.

These are all big reasons why I'm less and less interested in any social media platforms. I like to read my blog posts with an RSS reader because it doesn't hide the content from me or inject other content in the middle. That's also why I offer a RSS feed for my blog and my Weeklies notes so people who want to read my content can do that without the interception of social media algorithms.

Because let's be real: these algorithms are not for the benefit of the user or the human. They are used for brutally optimizing engagement which means that content that is clickbaity, provocative or simple gets way more exposure than other content.

In Youtube, this is heart-breaking for me when I see a channel announce they change their card game tournament format into shorter matches because longer content doesn't get rewarded by Youtube algorithm – even if that would be detrimental to the competition itself.

Recently a colleague shared some valid tips for how to post in LinkedIn and out of the 10 tips or so, 70% were about pleasing the algorithm and many of them actively hostile against the people we're supposed to write for (for example, putting links into comments). But if the option is that your posts and writings are not visible to people, most people choose the algorithm over the human.

I don't know if there's anything to do to make a difference. Personally I'm kinda getting burnt out by everything related. I don't want to write worse content just to please an algorithm and I'm tired of everything being a popularity game where you succeed by sacrificing humans to algorithms.