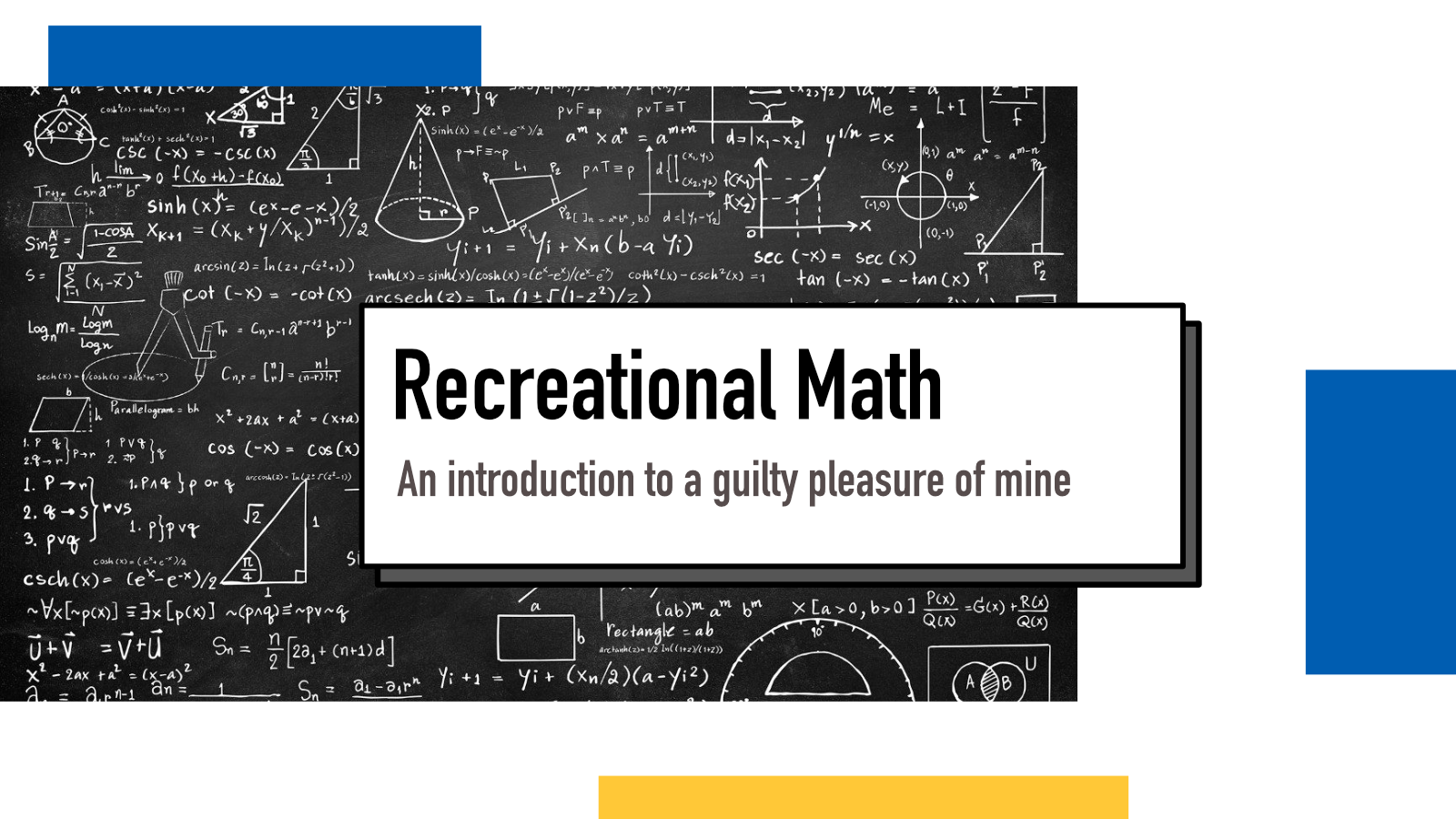 As I'm returning from a very relaxing 5-week holiday, I figured I'd get back into my weekly blogging with a rather casual topic. I'll be writing about some technical stuff like naming, learning and scraping in the upcoming weeks but today we'll talk about a guilty pleasure of mine: recreational mathematics.

As a younger man, I was quite much into math. In the middle school and high school, I was actually guide good at it (I even participated in a national math competition type of thing in the 7th grade). Then as I entered work life, I didn't do much math and by the time I got into university's math courses, I was completely out of touch and had a really hard time.

And even though I still haven't picked up learning real math (like derivatives and integrals or linear algebra), I do enjoy the fascinating world of mathematics from a rather different perspective of recreational math. Wikipedia defines it as:

Recreational mathematics is mathematics carried out for recreation (entertainment) rather than as a strictly research and application-based professional activity or as a subject that one is learning such as, for example, at school.

For me, it mostly comes in form of watching stuff on the Internet - quite often in Youtube. I love things that are fascinating in mathematics but either presented or applied in a obscure or fun way.

One of my favorite sub-topics is prime numbers. Youtuber 3Blue1Brown has a collection of amazing math videos but one that always impresses me is his video on the prime numbers. In the video, he not only talks about interesting properties of prime numbers, he combines it with amazing visuals that are a cornerstone of his videos.

Another favorite from the world of prime numbers is Dr. Holly Krieger's lecture Experimenting with Primes. Due to its nature, it's bit more educational but I love how she approaches primes in a very intuitive way and once she gets into dynamical sequences, the math gets so beautiful.

Next one is a book but luckily she's also done a lot of videos and public performances. Hannah Fry's The Indisputable Existence of Santa Claus is a must read for anyone interested in recreational mathematics. If you search Youtube with her name, you'll find a huge collection of interesting things she's done. She's amazing at bringing mathematical concepts to the level that anyone can understand. I can highly recommend her lectures in The Royal Institution, her TED talk about mathematics of love.

The Royal Institution is a nice segway to my next topic which is dimensions. Actually understanding anything beyond third dimension is very difficult and brain melting but it can create some amazing recreational math. Matt Parker visited The Royal Institute to talk about Four Dimensional Maths in a very delightful presentation (Matt is all around great performer). You gotta check out the 3D Shadow hat at the end of the talk!

Since circles are very math-y, let's circle back a bit. I started my examples with 3Blue1Brown and as we reached the section of higher dimensions, his guest episode in Numberphile (another really great recreational math Youtube channel) was wonderful. In this episode, he presents a darts game that is played in higher dimensions and teaches about calculating volumes of nD balls, probabilities and all that beautiful stuff.

I'm not much of a physics guy but since we're talking about recreational sciences, I had to add a mention of Randall Munroe's book What If?: Serious Scientific Answers to Absurd Hypothetical Questions. Munroe is a physicist who's mostly known for his wonderful xkcd comics. He wrote a book about hypothetical situations that are hilarious, fascinating and tangentially relevant to real life.

If you're not much of a book person (this one has a lot of pictures though!), he also did a TED talk about his book.