Roll and Write board games are awesome 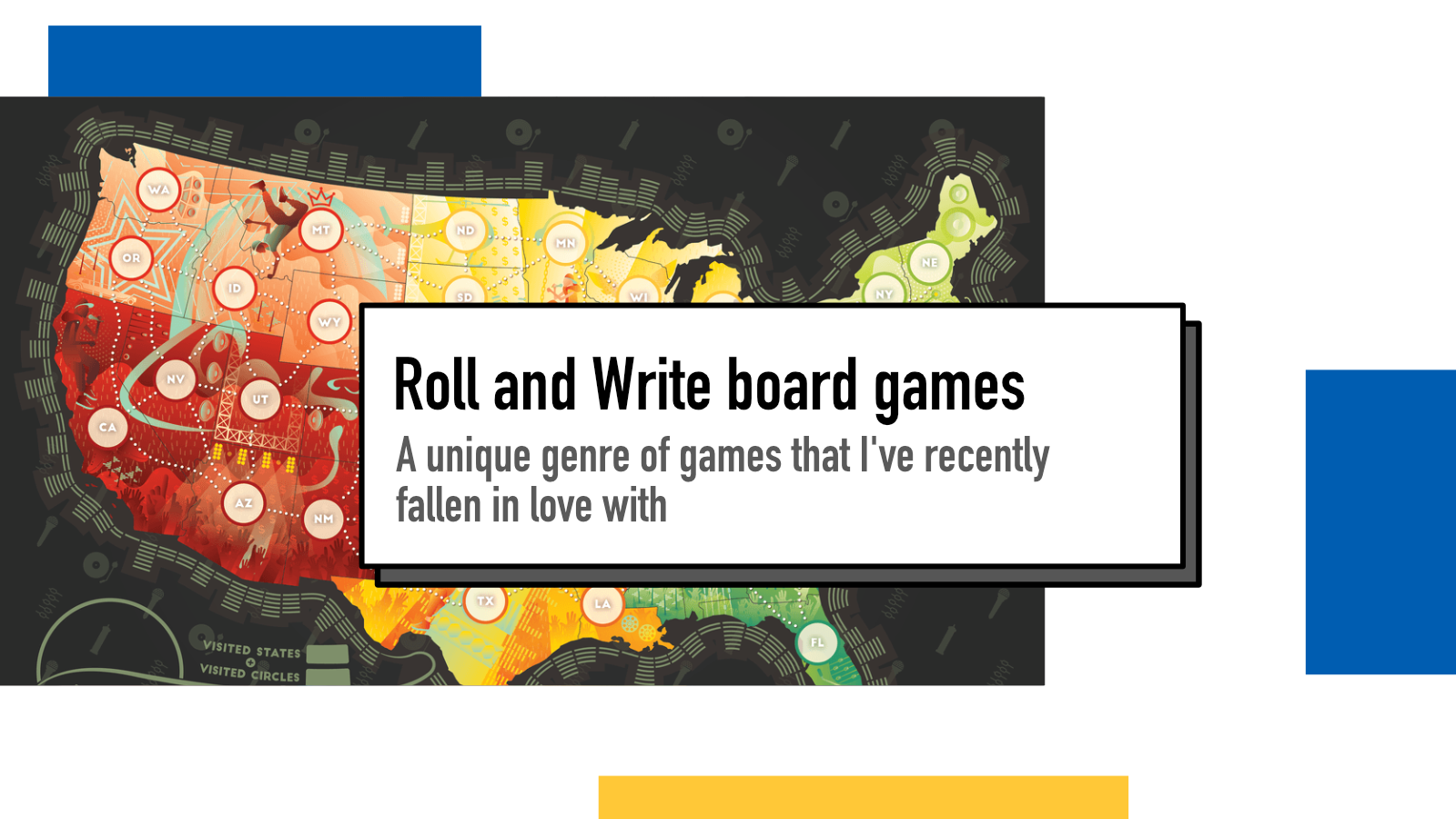 What comes to your mind when someone mentions board games? In addition to having a lot of fun with friends (or arguing with family over Monopoly in the 90s), one thing that is iconic to board games is having a board and a lot of meeples and tokens and cards. For a long time for me, the more the merrier.

Roll and Write board games are quite an unique genre in board gaming. First, they are often very light on game pieces: there's usually a board (either a plastic one with dry markers or a pad of paper boards) and some kind of a randomizer, commonly either a deck of cards or some dice. Second, the board is often forcing the players to ponder risk: there's a limited amount of spaces to fill, the randomizer is unpredictable but playing it safe won't win you any games. Third, there's often very little interaction and even less direct conflict with other players.

To me, for a long time those characteristics meant that I didn't like Roll and Write games. I especially enjoy playing against other players (not a fan of co-op games either).

Recently though, especially during the pandemic and while thinking about how to get new people into table top gaming, I've found a lot of love for these types of games. The ones with no interaction scale beautifully. You can play with unlimited number of players and even with pre-recorded sessions which is great if you're having trouble catching sleep on a lonely Saturday night.

The classic example of Roll and Write is Yahtzee which can be a fun quick game played anywhere at any time. It's also one of the simplest examples and probably won't excite most players to get interested in the genre so let's look at some more interesting ones.

Let's start from the beginning: what are these games about and how do they play?

To illustrate, let's take a look at a game that has zero interaction and thus can be played with unlimited amount of players and even when livestreamed on Youtube or Twitch. The game is called On Tour and in the game you need to plan a route for a band to tour around USA or Europe depending on the map you're playing.

In Roll and Write games, players have their playing boards / pads and they fill in, usually numbers or shapes trying to fill in the board with optimal results.

Each round, you need to place a number on a state/country in the map. The numbers you place are determined by rolling two D10s (for example, 5 and 8) and combining those digits both ways (resulting in 58 and 85). Then, three cards are drawn specifying the regions (West, Central, East, North and South) where you can place the numbers and you're good to go.

You start placing numbers on the board, trying to build a route of connected numbers that go up in ascending order. You can only move to a space that's connected with white dots and only if that new space has a number higher than the previous one.

In the end, you score points based on the amount of places you visit with your band.

I learned to play the game by playing along with Michelle and Ruel on a play along video. After that, I've played a bunch of other play alongs on Youtube.

An example of one of my finished playthroughs, my band The Wild Alpacas did an East Coast to West Coast tour visiting 23 states and scoring 31 points while playing the tunes of the tundra.

Another great example of the genre is Railroad Ink and its expansions.

In Railroad Ink, the randomizer is 4 white dice representing different kinds pieces of railroad and highway (straight lines, T-intersections, turns and so on) and depending on the expansion, some colored dice with special features like rivers, lakes and meteors.

Each round, the dice are rolled and every player needs to draw those four sections into their 7x7 board, building a network of highways and railroads that connect to stations at the edge of the board. At the end of the game, you get points for most stations connected, longest routes and other factors.

Railroad Ink is a great example of the replayability and variety of the Roll and Write genre: even though each round every single player has exactly the same pieces to draw, the boards end up very different and there's very rarely any obviously best options that would make everyone draw the same. Both On Tour and Railroad Ink are played with hidden boards so you can't see what choices other players make.

If you want to test the game out, I highly recommend Before You Play's play along in Youtube. They do a great job explaining the rules and walking you through the game.

Where On Tour and Railroad Ink are infinitely scalable due to no interaction and hidden boards, that's not something everyone enjoys when playing board games with friends.

Copenhagen Roll and Write is not only a lovely city in Denmark but also an interesting Roll and Write game that differs quite a lot with the previous two. In Copenhagen R&W, each player rolls dice with different colors on them and fills in a box of squares in their board based on their rolls with tetris pieces.

It's a Roll and Write adaptation of a more traditional style board game of the same name.

What makes Copenhagen R&W different from the other two is that it's played with open boards so you can always see how your opponents are doing and what they need to win. You also have interaction on each roll: every round a different player rolls dice, chooses some of them to use and the other players choose from the rest to advance their own board. The game is also played until someone scores 12 points compared to set amount of rounds in the previous two example games.

This means, you need your own friends to play the game with, no Youtube play alongs. However, if you want to learn the game and see how it's played, there's a really good video on BoardGameGeek's Youtube channel.

Qwinto, all about them maths

If you want a quick pocket sized number based Roll and Write to put into your backpack for those coffee breaks or while sitting in the train, Qwinto is a really good choice. Its game board fits a small post card and plays quickly.

It shares a lot of mechanics from Yahtzee but is just so much better. Each round a player rolls 1-3 dice, gets a reroll if desired and then scores on the board, matching the color of the die to the rows in the score sheet.

The R&W magic comes from the risk taking and pushing your luck part: in each row you can place your number anywhere, but you can only write numbers in ascending order and on each column, you can have no repeated numbers. Suddenly, the simple mechanics turn into a challenge.

If you want a more entertaining example of why Qwinto is great (and couple of other Yatzhee-but-better examples), head over to No Pun Included's Youtube channel.

Many of the Roll and Writes that I've played are rather chill. You might have to make a few hard choices during the game play but are not that often completely blocked off. That's not the case with Rolling Japan and its US version, Rolling America.

What makes these games hard is its limitations.

Each round, a player takes two of the seven dice (6 matching the colored sections in the map + white joker die), rolls them and the players then write those numbers somewhere in the map while matching their color. The gist is that each adjacent space can only be filled with number equal to its neighbor or one lower or higher. So if I put number 5 in a space, any space touching it needs to be either 4, 5 or 6.

With the way the maps are laid out, you'll start running into impossible rolls quite quickly. The winner of the game is the player with least unsuccessfully filled spaces. There are a few extra abilities like changing a color, guarding a space and duplicating your roll which allow strategic choices to overcome your competition but I haven't had such hard time filling a piece of paper since my university entrance exams than I have with Rolling Japan/America.

That said, it's still a fun and great game since every game is equally difficult to every player.

If you want to see how the game plays in real life, head over to Rahdo's Youtube channel for a great explanation.

I only touched the surface here

These are just some of the examples of the genre. BoardGameGeek has a community curated Roll and Write list that at the time of writing has almost 300 Roll and Write games to explore.

One downside for Roll and Writes is that since you write or draw on the pieces every time you play, there are two main options for materials: either a stack of paper with the board printed on each which eventually leads to them running out and there being extra paper trash around, or a plastic one with dry markers that can be wiped clean after the game. In my experience, they tend to leave traces and over time, they become less nice to play with.

I've recently played a lot of these with my iPad. Either by using publisher/designer provided board PDFs (like in case of On Tour) or by taking a picture of the board and importing it to my note-taking app on iPad and drawing on top of it. This way, it's so much easier to make changes, fix errors and even share the screen with other players if ever needed.