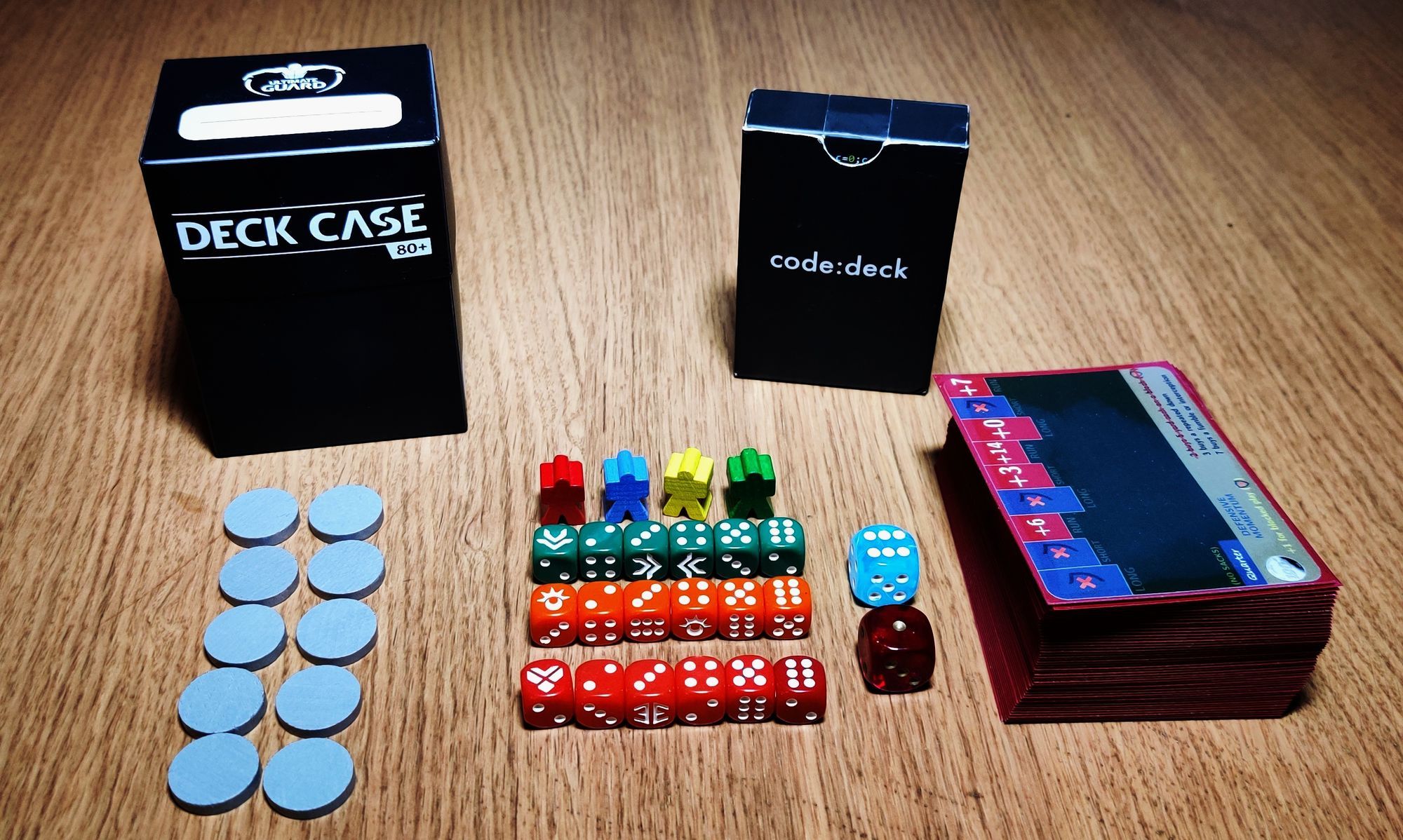 I love table top games. Whether it's a complex big box strategy game like Eclipse or Power Grid, a more casual light-weight game like Ticket to Ride or Carcassonne or a smaller game like Fluxx, I'm excited to play it.

But apparently the industry is still being dominated by traditional retail market which leads to games being sold in huge boxes, even when the actual contents of the game can fit your pocket. As someone who travels a lot and in general, likes to find ways to fit everything I own into a backpack, I've been interested in different micro games and movements around that. BoardGameGeek is a nice resource for me. There are plenty of designers who have built PnP (Print and play) games that are basically just rule sets and designs that you can print yourself rather than buying a produced version from a store. There's also a community in BGG for games in mint tins where the entire contents of the game must fit into a mint tin container.

During Christmas, these ideas got combined and mixed up in my head and as I was playing around with an old deck box that used to contain my Pokemon TCG cards, I got an idea. I started to research games that require small amount of cards. After a bit of back and forth and doing inventory on my board game stuff, I ended up with a following set.

I wanted a collection that doesn't take much space and contains easy and fast games that still have certain amount of depth in strategy. These games are meant to be played when waiting for more players to join (most are 2-player games) or while traveling on the train or during a break at a conference.

Disclaimer: These cards are custom made for personal use only. I have reused some content from the Internet and some redesigns of the actual cards. I do not own the rights for those art works and thus I will not provide the files for anyone else to print these nor will I sell any of these cards.

Let's start with the basic pieces. I use an Ultimate Guard 80+ deck case. Inside that, I have a case from Varianto25's code:deck. I took out the cards and it functions now as a case for all the tokens and dice. For tokens, I have 10 plain grey discs, 4 Carcassonne meeples, 3 sets of small dice in different colors (these are from Pokemon TCG Elite Trainer Boxes) and two larger dice in different colors.

The token selection is mostly based on a guess of what I'd like to have to build a versatile box. Not all of them are used in the games included in this box but for example with the 18 small dice, you can play many different dice games. I have also repurposed them to work as counters (we use them for damage counters in Pokemon TCG which gave me the idea to use them as keeping score or resources).

For sleeves, I use Dragon Shield's Red Matte sleeves. Sleeves serve double purpose: they protect the cards and make it possible to have double-sided cards.

I put tokens into the code:deck box and put that inside the UG deck case. Let's take a look at the cards & games included in this collection.

There are 6 games included in this set. I spent countless of hours over my holiday in Affinity Designer and DeviantArt to make good looking cards. I calculated that the box fits 50 sleeved standard sized cards with the token box. I decided to print cards as double-sided so that I could switch a game to another by flipping the cards inside sleeves.

First game in this collection is a classic trick-taking game Pico.  It is a two player game that is played with 11 cards with numbers from 2 to 10 + 13 and 16 with red dots marking score from 1 to 4.

You shuffle up  the cards, deal 5 to each player and hide the 11th. First round, you play one card at the time face-down and reveal at the same time. The larger card wins unless it's over 2x bigger. So 10 wins 5 but loses to 4. Winning card stays in front of the winning player while the losing card returns to loser's hand. This is repeated until one player has only one card left. At that point, total score is calculated and second round begins. Players swap their piles of cards and repeat with the same rules. After these two rounds, winner is the player with most points.

Pico is a simple, easy to learn, includes mind games (which I love) and runs fast.

If Pico is simple and easy to play, Win, Lose, Banana is even simpler but deceivingly challenging. It's a 3-player game that has only 3 cards. You shuffle up the cards and deal one to each player.

The world's smallest football game, Famous First Downs is already a great travel game. The official product comes with 9 cards and you use coins to keep track of different things.

The problem with my case was that the game uses double-sided cards within the game (to save space, love 'em for that) but I need every game to be on the same side of the cards. So I took the original cards, created simplified designs and solved the problem that way.

This 2-player sports strategy game has the best aspect of football - trying to outplay your opponent with your plays - without the worst part - actually running on the field. Just like real football, this game looks simple but the strategies go deep. In addition to choosing individual plays to gather yards in an attempt to score a touchdown or a field goal, you can gain and spend momentum tokens to boost your success or hinder your opponent's attempts.

In the game, you play a game of football where you alternate between playing offense (red cards) and defense (blue cards). Offense chooses a play and puts that face-up into the field. The defense then chooses their play in secret and plays it face-down. After this, the offense chooses one of the 3 available throw or run plays (marked red in top of the card). Then you look what the corresponding defensive play is and either gain or lose yards.

I replaced the coins requirement by adding the 20 dice into the mix as they can be used to keep track of both the yards gained as well as the momentum tokens.

If you are even little bit into sports and table top games, I highly recommend checking out the original Famous First Downs. They also have other sport games in their series of small card games. I haven't played any others but this one is often cited as the best in the series.

During Spring, Summer and Winter

This game (also known as 春夏冬中 or Akinai-chu) is a beautiful game for 3-4 players. There are 18 cards (17 in the picture + 1 blank card): 4 seasons with values 1-1-2-3, a rainy season card and a blank card. The game is based on hidden information and asking questions that offer you bits and pieces that you need to put together.

In the beginning of the game, 1 or 2 cards is put face down on the table and rest shuffled and dealt to players. Each turn, a player has two possible actions: a question and a challenge. You can ask any other player either the total value of a season (for example, Spring) or total number of cards with a given value (like number 2). If a player asks for the value of a season, they must reveal one card from their hand and place that face-up in front of them.

Once you figure out what the hidden card(s) is/are, you can make a challenge and guess the season and value. They secretly then look at the card(s) and if they are correct, score the point written on the card. 6 points wins the game.

There are couple of extra rules that make the guessing bit more challenging but I won't go into the rules in-depth here.

If you have ever played Hanabi and enjoyed that, give this game a try as well!

Fifth game in this collection is Zeppelin Derby, a 2-player race game. This game is one of the simpler side in this collection. You have a race track (3 light blue cards on the left) with two zeppelins racing against each other. You roll a dice, move your zeppelin and use the other cards in the picture to gain advantage or to harm your opponent's progress.

First one to finish line wins.

I wanted to add one bit more complex game into the mix, just to see what can be done with limited space. I chose Hanamikoji which turned out to work really well in this collection. It is a 2-player area control game. It's also the one that has been downsized the most out of this games. The original game comes in a box, the geisha cards (which I replaced with my favorite video game characters) are big and the tokens (cards in the bottom) are square tokens. I made everything into a standard size card and redesigned the theme to be video games rather than geishas.

The upper row of cards in the picture are characters who we try to win to our side. The number in the corner tells us how many items there are for that character as well as how many points this character is worth. Second row is items that are played to control a certain character. Bottom row is action tokens.

All items are shuffled and dealt to players. Each round, player has four actions they must take but they can decide the order. #1 lets you hide one card under it - this will be revealed at the end of the round and counted for you. #2 forces you to discard two cards in hidden - they won't score any points for you. #3 makes you to present 3 cards to your opponent. They then pick one and play it on the field and you play the other two. For #4, you choose four cards and make them into two pairs. Your opponent then chooses one pair and plays them and you play the rest.

Each card is played to its corresponding character as noted by the colors and the themes (Thunder Stone for Pikachu, Tomato for Kirby, Arwing for Fox, Master Sword for Link, Super Crown for Bowser, Bell for Goose and Strawberry for Madeline). At the end of the round, if your side has more cards for a specific character than your opponent, you move a token to your side of the card to note that you have won them over. If it's a tie, the token does not move.

If after any rounds, one player has either 11 points or controls 4 characters, game ends and that player wins.

Hanamikoji is one of my most recent favorite games. The way cards are played with the actions really forces you to make non-optimal moves and forces you to balance many things in your mind at the same time.

All in all, I'm happy about how this collection turned out. It's the first version as I had to pick some games and see how it goes. I'll probably do some changes into it as I discover new games or get bored to the current ones.

I used MakePlayingCards.com to print the cards and this entire collection of cards cost me less than 20 euros (including shipping to Finland). I do recommend buying the original games if you are not restricted by the space available.

I had a lot of fun making the cards and trying to find ways to put multiple interesting games into such small space. I can't wait to take this on the road with me the next time I travel to test it out in the real world.