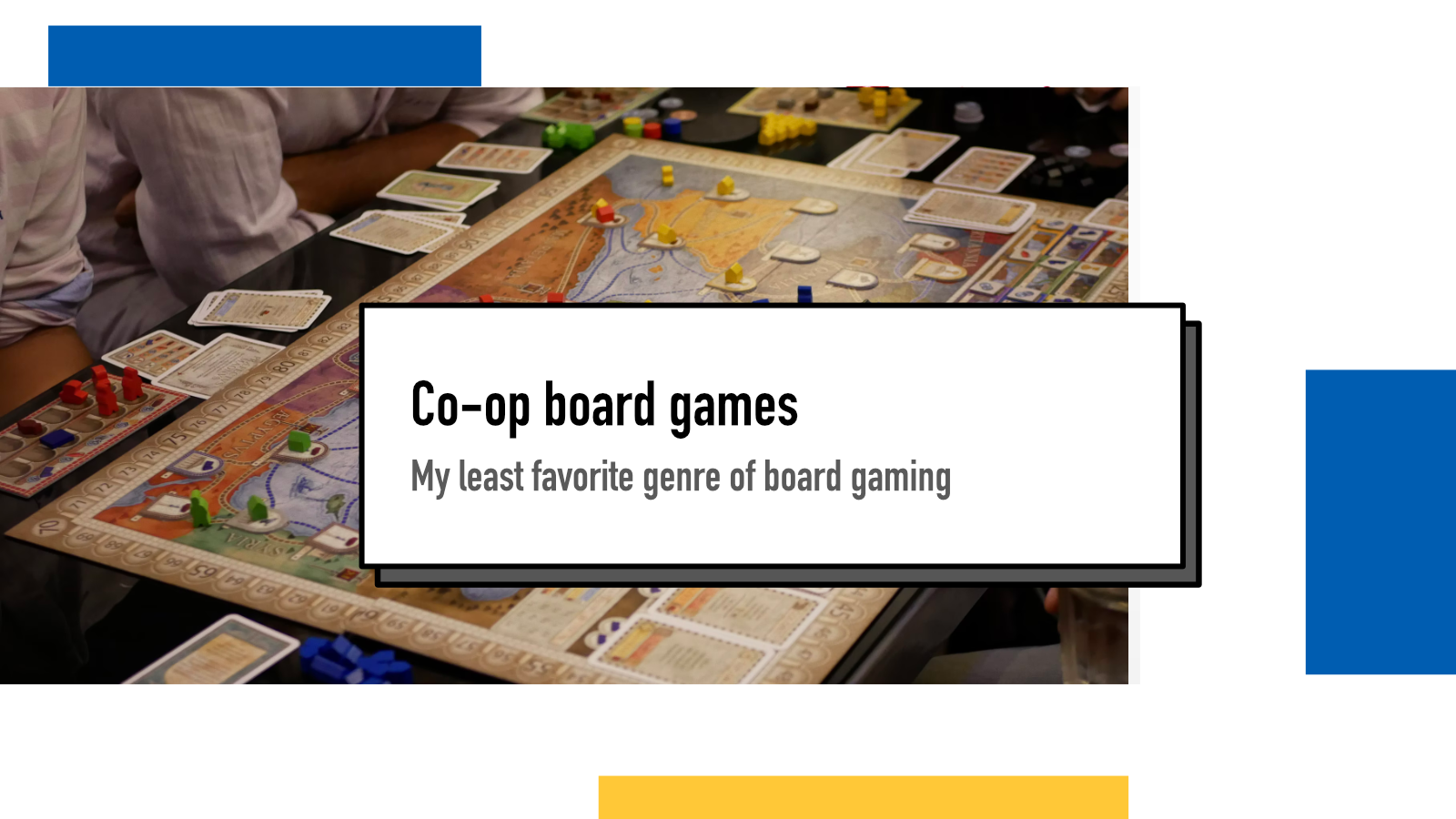 Long-time readers already know that I'm very passionate about board games. Last fall, I wrote about a genre of games I – to my own surprise – found a lot of love for: the roll and write games. During Christmas holidays, I played quite a few games (namely, Gloomhaven, TEAM3 Pink and Marvel United) from the genre I usually avoid: co-op games.

I like teamwork and when it comes to sports or video games, I absolutely love playing and winning together but unfortunately the same concepts don't transfer well to board gaming.

Playing against the board

Compared to for example video games, the opponent is very static: it's basically the rules and the randonmness. In a co-op video game (let's say for example a shooter game), every player needs to perform on their own and only the goal is shared and strategy discussed. It's practically impossible for other players to play for you.

However, with (most) board games, there's no similar dexterity element. There's only decisions made and the knowledge, experience and logical thinking that leads to those decisions. And they can be played for other players.

And that's the biggest problem I have with the genre: if you are playing a co-op game and you aim to win, the best player can (and should) lead the game on everyone's turn. Players discuss what actions they should take and it would be a bit foolish to withhold knowledge and information if such exists.

Some games combat this with variety of techniques.

First two techniques are very arbitrary and artificial and in my opinion don't contribute to a great gaming experience.

Games like Hanabi (the best pure co-op game in my opinion) prohibits all discussion between players. You're not allowed to talk about strategy or your plans or what someone should do. And that does solve the problem but it introduces an even larger problem: board gaming is a social activity. When I get together with my friends to play, the last thing I want to do is sit in silence.

Other games like Gloomhaven prevent players from discussing specific information (in this case, names and initiative values of cards) but not general strategy. In games like these however, I often see players circumvent the rules by vaguely discussing it ("I have a large number" instead of "I have a 80" or "I can take care of these two monsters from distance" instead of "I have Archery").

In addition to these hindering discussion, my main problem with this is that it's so arbitrary. And often leads to problems in defining what is actually allowed and not because you can pretty fast get to the point where you can talk about the cards without actually talking about the cards when you discuss strategy and next steps. Unless you go all Hanabi on it.

Some games like Forbidden Island just make the game very random-heavy. It leads to the game being challenging even with one experienced player but in my experience just leads to the situation more often than not, that the result of the game is less about your skills and more about the RNG. Aforementioned Hanabi also falls into this category which is one of the things I don't like about it.

My experience with Pandemic is similar: the game is hard but not for the right reasons. Anytime there's a situation where even optimal play would not lead to win, I think the game has failed and my gaming experience is somewhat ruined.

I'm not completely against randomness because I think it brings interesting variety and makes it so that games don't just become chess but if due to the randomness, the game creates an unwinnable situation, it's too much.

Another way to try to solve this is by introducing hidden personal goals. These are given to players at the beginning of the game or scenario and cannot be discussed or mentioned but can lead to conflict between players in the same team. Gloomhaven does this on a scenario basis. Dead Winter has this mechanic and I've been told you can play it as a pure co-op game with them (it usually otherwise falls into the next category).

To take a step further, there are games that are co-op only on the surface and they suddenly turn my least favorite genre into my favorite genre: the traitor mechanic. I've written earlier a more in-depth look into hidden identity games but here the idea is that you don't know who is your friend and who is working against you. The players still discuss and strategize together but since you can never trust a player, everyone is required to make their own judgement calls at the end. My favorite in the category is Battlestar Galactica: The Board Game.

TEAM3 games solve the problem in a very different way: by creating different unique roles and making it impossible to play anyone else's. In TEAM3, your team needs to create a physical structure from differently colored and shaped blocks. But the twist is this: the player building cannot see, the player who knows what is to be built cannot talk and the third player needs to be the communicator between the two.

It only works for certain types of games but it does ultimately solve the issue.

Bringing in real-time constraints is one more way to battle the issue of all-knowing player. Games like Escape: The Curse of the Temple or Space Alert are co-op games where time is limited and always running. It creates an environment where you just simply don't have time to fully discuss everything but you can still benefit from the group-thinking if you're fast enough to discuss.

"Just agree that everyone plays on their own"

The other side of the coin in this discussion is that the gaming group could just decide not to do it. They may discuss strategies but everyone eventually makes their own decisions.

Maybe it's the competitive side in me but I just see this as another arbitrary limitation, this time not set by the game but by the players. If you can make an optimal move as a team, I think you always should.

I would really want to like co-op games but pretty much every time, I run into these problematic aspects of them and end up rather playing something different. I'm not sure if it's a design problem or just something that is inherent to board gaming that makes co-op games nearly impossible to design well.