My pockets are full of games 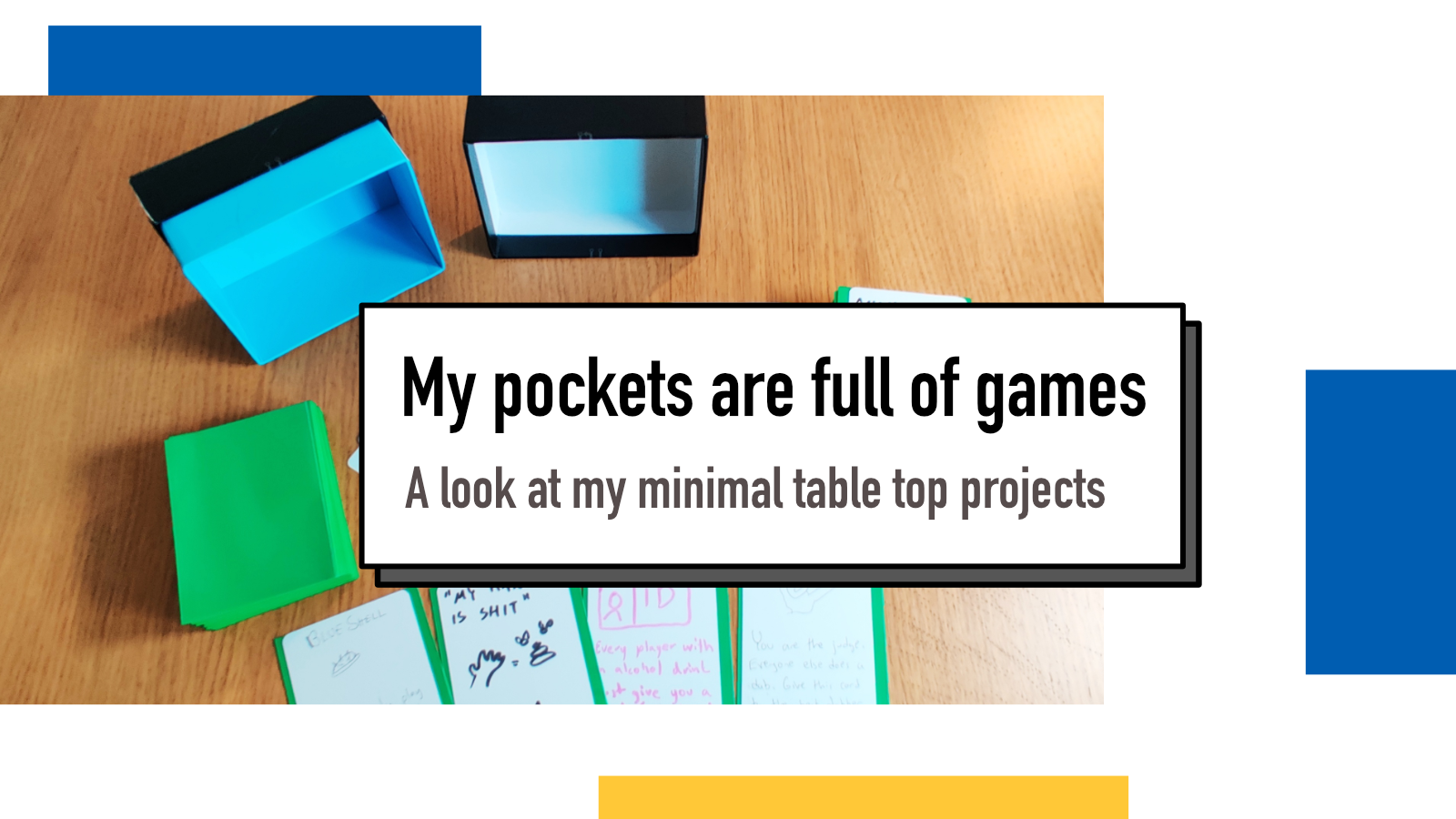 It's time to  talk about board games again. I love them. What I don't love is the big boxes many of they come in and how hard those games are to take with me in the backpack. Being a creative problem-solver, over the past couple of years I've experimented with a lot of things to solve this problem.

I have built so many things that fit into my pocket that my pockets are getting quite full. I wanted to take a brief look at what I've built, why and what I've learned because for a developer like me, doing physical tangible things is a great distraction from all the digital.

It all started with multiple ideas converging

A couple of things lead me to finding this super niche interest of mine. First, my love for board games started as a kid but was truly resurrected in early 2010s when I started studying at the university where we had super active board game group that I still play together with.

Second, around 2016-2017 I started to think more about what I own and how much clutter and stuff I had and explored ideas of minimalism, leading all the way to me living with no permanent home and all my stuff in my backpack for 5 months in 2018.

Third, I traveled a lot both domestically and internationally during 2018 and 2019 and I wanted to bring my games with me in the backpack so I could play with people I met in conferences or in the train or while waiting for the delayed trains.

And finally, I had been playing Pokemon TCG for years and had been experimenting with printing proxies to enable more play testing with cards before investing money into them. So the idea of printing cards, putting them into deck boxes (which I had plenty all around) and playing with them was familiar to me.

So in December of 2019, I had lot of free time to think about stuff and learn non-work relevant skills so I ended up opening Affinity Designer and starting to design some cards. That turned out into my first project, dubbed Minimal Travel Table Top Game Collection because I wanted to give it a cool name so I could showcase it to my friends.

The collection packed 6 different games into a package that fit into my pocket. It had games for 2-3 players. Some were pretty straight-forward transformations of existing games into my double-sided cards format and one in particular was a more thought-through transformation of a big box game into this small form factor.

While the world shut down pretty much a month after I got this set, I have played these games at work and last summer when I was able to escape to the countryside for a moment to hang out with my family. I can't wait to be able to take them with me to conferences when those happen again.

As the spring of 2020 continued forward, it become quite obvious I wouldn't be traveling and playing the games of my first set as much as I had hoped. So I started to think about the second iteration of this set, this time focusing on single player games and focusing even more on the great print-and-play community and games designed there.

This time, since print-and-play games were already distributed as cards you can print, there wasn't any redesign process. Minimal Travel Table Top Game Collection 2: Social Distancing Edition followed the naming conventions of my new "brand".

I did make a mistake here though. When printing cards with a home printer and cutting with scissors or paper cutter, it's perfectly fine to take an A4 PDF and print it. Things will be good. But when ordering actual cards from a card printing house, you need to take into account bleeds and safe margins and by not redesigning the cards from scratch, I ended up with some games that were not optimally printed. I was bit too lazy and just wanted to get the cards ordered.

I'm happy that happened with the collection full of solo games because they were still fully playable, just not as high quality as I set my expectations for my own projects to.

Still, the games are fun and I've had so many good evenings alone at home playing these games. My favourites so far are Switchboard and 12 Patrols which are brilliantly designed and nice puzzles to solve.

The second set followed the same design principles of the first one: everything should fit a 80-card Ultimate Guard deck box, be fun to play with and look stunning.

Come 2021 and my itch to build some kind of set again was becoming stronger. As I mentioned earlier, playing Pokemon TCG has been a passion of mine since 2014-2015 and I had played hours and hours of it online via the digital PTCGO platform. But it was never the same as playing with physical cards and I wanted to explore some of the older formats before my time. I was getting bit bored by the power creep and staleness of  the standard format.

Luckily, one of the all time best in the game, Jason Klaczynski has a blog that had sections for every format and set in the history of the game with decklists that you can build. He called the 2004 EX sets as the Golden Age of Pokemon TCG so I obviously wanted to try that out.

The problem with Pokemon TCG and playing with decks is that sometimes two decks are not a great experience against each other even though both of them could be fun separately. And if you play with just two decks over and over again, you end up playing with the same strategy all the time.

So I wanted to build something bit more varied. I took five decks from Jason's blog and printed proxies for those, sleeved them on top of old bulk cards and created a five-deck collection. I've been playing those decks against each other alone (I can't emphasise enough how much I miss playing with other people) and they are pretty fun in all different combinations.

This brings me to my latest project that fits into my pocket. This time I did something bit different again. Instead of building a collection of games, I took a big box game (that is hard to buy in Finland unfortunately) that I had played online and tried to design the elements from scratch to make it feasible to be played with 5 people while still adhering to the fits in deck box and looks stunning design philosophy.

The game is called Draftosaurus (it's fun, you should buy it if you find it) and it's a drafting and dinosaur zoo building game for up to 5 players.

I took the game play elements of different pens where to place dinosaurs and designed those to fit into standard size playing cards. Each player's entire zoo fits into 3 cards (with another map on the backside!) so with 15 cards (and 3 for rule references), you can play a 5 player game. There's also a bag of standard Carcassonne-style meeples that I use as the stand-in for the dinosaurs and a cloth bag for drafting.

Using free icons, self-designed card layouts following the format of the main game and some art work from online, I'm super happy about the end result. Like with previous builds, I don't have the rights to distribute any of the art work and I encourage you to buy the real game so you'll have to stick with these pretty pictures. These projects are built for my personal use only.

Make your own game – on the go

My next pocket-sized game is definitely a unique one. It's a game I learned in the university and most people I've played it with had not heard about it before I introduced it to them.

It's a game best played with creative people who like to have fun. People who take winning too seriously won't have a good time. And the best part is that the game evolves with every gaming session.

The game is called 1000 Blank White Cards or 1kBWC amongst those who like that kind of stuff. To make this game yourself, all you need is pen, paper, scissors and friends or foes. You cut your paper into card-sized chunks (or you can use postits, index cards etc), sit down with friends and start drawing cards.

The rules of the game are defined by the cards and they can be about anything. You can make cards that give player points when played – but remember, those points only matter if there's another card that says they do.

Here's an example from my current set. I have bunch of empty cards (I need to order more when the pandemic is over) and bunch of prewritten ones from my previous sessions with different groups. Currently I have roughly 100-150 cards in my collection.

Here are some random examples from my collection to give you some ideas. Harry Yer A Wizard awards player 123 points if they say a Harry Potter spell. Irrational ideas awards player √-1 points when played. No Service forces a player to discard a point card if they use their phone during the game.

All my pockets are full

Having built multiple deck box sized projects, the entire collections is not so minimal anymore and I definitely can't fit all these into my pockets at the same time. But I can always pick and choose which ones I want to take with me when I travel – in the far future when that's possible again.

On the bottom row are my five Pokemon TCG EX Era retro decks and the dice & tokens slide nicely on top of the 1kBWC box on the top row.

I still own a small collection of big box games (like Flamme Rouge that I've written about before or Crisis that's so far the only table top project I've backed in Kickstarter). And I'm thinking about buying Dale of Merchants collection and dedicating one or two deck boxes for it so I can pick certain decks with me instead of the full package when I travel.

By building all these things I've learned so much. I've learned about designing cards and how the printing world works. I've learned a bit about branding and productising these projects even though I'll never sell or distribute them.

Most importantly, I've built myself a collection of variety of games that I can fit into my backpack and play wherever, whenever once the world heals.

And I'm 100% sure these are not the last projects I make. One day I want to design my own game (I've dabbled into that territory a couple of times but haven't succeeded in making anything playable yet) and build small pocket size packages to sell.