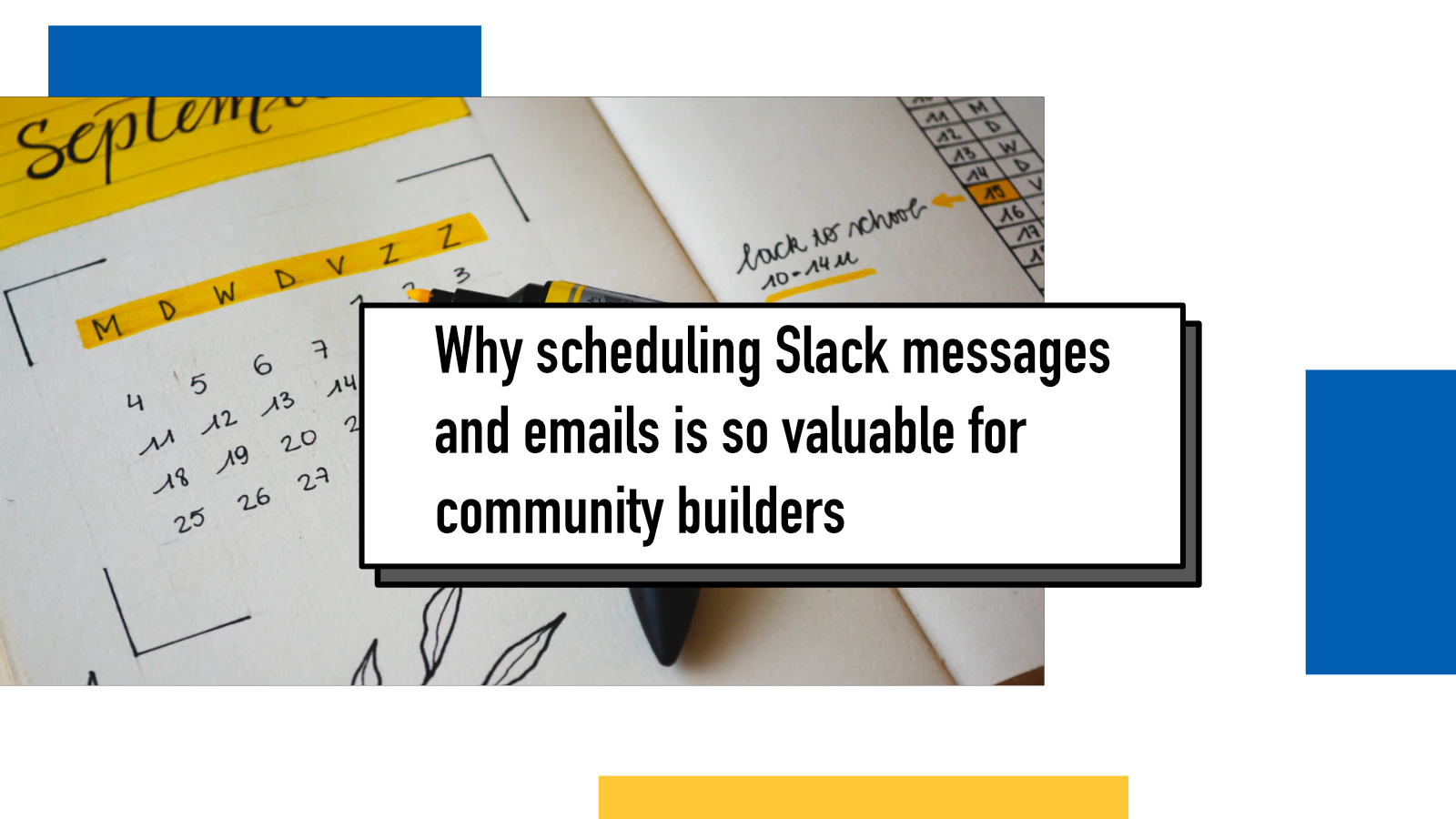 It was the first day of my holiday (editor's note: I was on a non-work Slack) last Saturday when I suddenly saw something in my Slack:

Finally, native message scheduling had arrived to Slack and I have probably never been so happy about an update to a corporate tool – especially on a holiday.

But it's something I've been waiting for and dreaming about for years. It might sound a bit silly but let me tell you why this is such a big deal for someone like me who builds communities and organizes events.

The Power of Schedule

At first, it might sound a bit less human to rely on scheduled messages on instant messaging platforms and to certain extend I agree. I'll talk about this at the end of this post!

As a community builder, I run a lot of different programs and initiatives from events to newsletters and smaller "campaigns" – for the lack of better word. This means there's a significant delay between me having information and me sharing it with the community. Let me tell you a couple of examples:

In my current job, one of the things I run is Tech Weeklies. It's a weekly tech meetup where my colleagues give talks to each other to share what they know. Occasionally we open the doors to the public, sometimes we invite people from the industry or partners to talk about their stuff and often we publish our talks in Youtube for everyone. It's also a great platform for improving communication skills.

For me as the organizer, it means that:

Now the actual time spent working on those info messages is probably 5 minutes a week. But when spread around the week, taking into account context switching, being in Slack to send them and so on, it multiplies really fast.

I've been scheduling those emails already from the very beginning but I couldn't do the same with Slack natively.

Given the power to natively schedule these Slack messages, I can do everything at once.

Building communities outside of work

I also build and run a bunch of communities outside of work. What it usually means is that I don't always have availability to work on them when they would be best worked on.

Being able to write all these messages at once, schedule them (and if needed, modify if things change) is gonna be such a time saver and improve the communication.

I have info much earlier than I share it

As I create different things for the community, my work is often done in two major spikes: one at the beginning and another at the end. On a single day, I might be planning and preparing things for 4-5 projects/events and like in my previous example, I can't send all of that info at once. Hence, scheduling is super valuable.

This year I knew somewhere in February or March that I wanted to crowdsource my colleagues blog posts for our July edition of Dev Breakfast newsletter but it wasn't the right time to ask for them. I had my form for collecting those ready weeks before I actually asked for them.

If I could have scheduled that message (with reminders!) on one sitting, it would have opened up so much mental energy and time for other stuff. Instead, I had to wait for the specific Monday to arrive and wait for the right time and then be there to send the message.

I also tend to do most of my administrative and preparative work on Mondays and focus on people and relationships Tuesday through Friday. This new feature enables this habit even more.

Being more appreciative for other people's schedule

This one is a bit more controversial in a sense. I'm a strong believer that Slack and email are asynchronous tools where you should be able to send a message to someone even during the night or during their holiday. But since that's not the culture in every work place, I try to be more mindful about this.

So if I know my colleague takes Wednesdays off and I get a great idea on Wednesday, I can now schedule that message to be sent on Thursday – instead of having to add myself a reminder to start the discussion on a later time.

So earlier I mentioned about how it might feel a bit less human to use these scheduling features and if done wrong, it absolutely becomes that.

The key here is this: scheduling information emails opens up my time for actual discussion with people in my communities. Since I don't have to make sure I'm at Slack sending a message at a given time, I can use that time to focus on people – including taking better care of myself.

I've earlier written about why event organizers should automate as much as possible and scheduling things is essentially automation. It's about categorizing work so you can do a lot of information sharing at once and distribute the delivery of those messages to best suit the receivers' schedules and habits.

Some Slack app bots have already enabled this type of functionality before but my experience with working with people is that those bots tend to get ignored quite quickly compared to a real human sending the message.

So for my colleagues and members of the community: you don't have to worry about me becoming just a scheduling machine. I'll just automate the boring bits so we can focus on things that truly matter.