My travel setup for Nintendo Switch 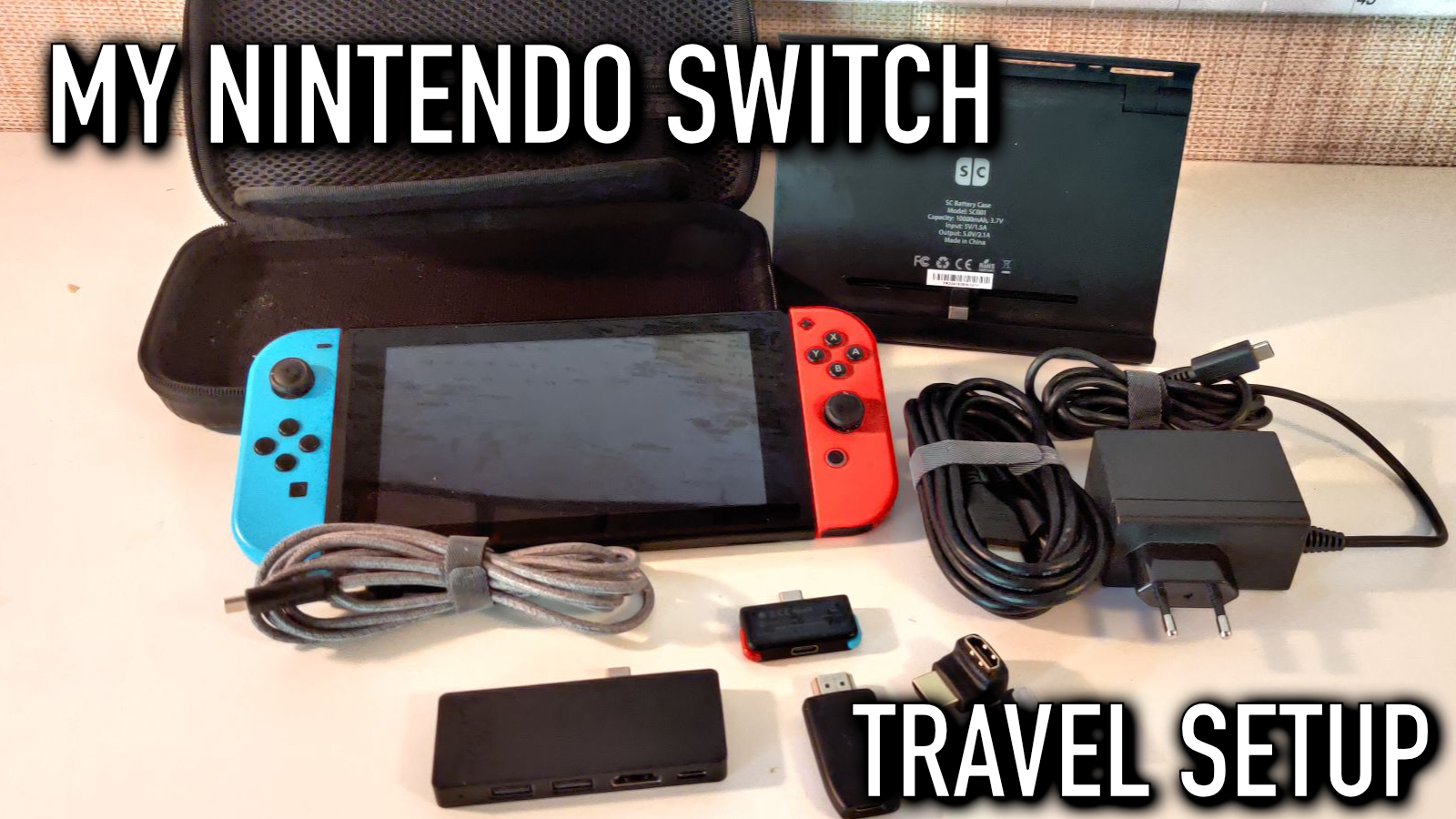 It's summer time and often for me it means a bit of traveling. Obviously last summer and this summer, it's limited due to the pandemic but I did have a change to visit my parents early this summer.

Nintendo Switch is a great travel console because it's a hand-held device. However, if you want to play it on the TV or projector when you travel, you're gonna need more stuff and the Nintendo's own dock & charger combo is rather bulky.

Here's my travel setup and how it has evolved over the two years I've had Switch. I don't always take everything with me, only for longer trips.

When I bought Switch as a birthday gift to myself (being adult is fun), I also bought this power bank that doubled my mileage with the console. As a hand-held console, Switch has about 3-4 hours of power and I used to often sit in a train for a whole day when traveling to Europe. It also doubles as a better kickstand for the console for tabletop mode gaming and it allows me to charge my phone too.

That powerbank came with a case that fits the Switch, the powerbank, some games and small accessories like those Joy-Con guards I've never used.

Then the gadgets arrived

Little by little though, I started to expand my Switch's capabilities.

First, I got Skull & Co's Jumpgate dock. The dock itself is a bit larger but it has a detachable CORE which is basically a Switch compatible (but 3rd party so bricking problem is always looming, do your research before buying) USB dongle with HDMI and two USB-A ports. It plugs into the USB-C port in Switch (just like a regular dock) and boom, you're good to go.

But with the dock, you also need a charger and a HDMI cable. I only ever use Nintendo's official charger but it's bulky af. And HDMI cables ain't tiny either, especially since I usually want to have at least a good meter or two to safely connect to TVs.

A bit after the dock, I also bought Genki's Shadowcast from Kickstarter. Shadowcast is essentially a cheap and small capture card that plugs into HDMI port in the dock and outputs to laptop through a USB-C cable. I don't use it for capturing that much but it does allow me to play games from a computer screen – in my case my Macbook's 13" screen which is a big size improvement over Switch's own 6.2" screen.

And since that capture card is bit bulky as well, I needed to get a 90 degree HDMI adapter so it fits to the CORE dock at the same time as the power cable. And my purchase came with two of them which is nice if I ever need to connect to a tight place on the other end.

To finish my setup, I also got Genki's Audio which is a bluetooth adapter for Nintendo Switch since despite having built-in native bluetooth, the console doesn't allow connecting bluetooth headsets.

With all of these small gadgets and bulky additions, I was faced with a new problem. They don't fit into my small cover case.

GoPro to the rescue

Luckily I also own a GoPro for which I bought this rather big case 'cause I figured I'd buy a bunch of additions for it. I didn't.

The GoPro case fits my Switch with the powerbank, two Joy-Cons and all the adapters, dongles, chargers, cables and docks in my setup.

An added bonus is that my GoPro and its accessories fit into the Switch case so I didn't even have to find a new home for it.

And it fits my backpack perfectly

I've been a happy owner of Peak Design's Everyday Backpack for a while now and I was really happy to notice that in my current arraignment, the GoPro case with my Switch inside fits perfectly to one of the slots. Sometimes all the stars just align.

Any recommendations for games?

Firstly, I'm a major fan of Nintendo's classic series: Mario Odyssey is the best 3D Mario game (yeah, I said it, Mario 64 diehards), Legend of Zelda Breath of the Wild is the best Zelda game (it even beats A Link to the Past) and its sequel is coming next year! Link's Awakening remake is another great addition to the series and worth buying even if you've played the original or the DX remake. Pokemon Sword & Shield is a great addition to the Pokemon series. I haven't played Pokemon Let's Go games so can't comment on those but many people seem to love them.

And then to the other games. Slay the Spire is a deck-building rogue-like and one of my favorite games in the genre of I can play for 5 minutes when I wait for a bus. Compared to the mouse-driven controls of its PC version, the Switch controls gets a bit to get used to but I've already learned to love it.

Mario + Rabbids Kingdom Battle was a very positive surprise. I ignored it for a long time but for this summer's escape to my childhood home for a few months, I wanted something completely new to play so decided to buy it and I've been enjoying (almost) every bit of it (some of the puzzles are frustrating).

Shovel Knight: Treasure Trove is one of the most hyped modern retro-style platformers and for a reason. It's a really good game and the Treasure Trove version includes the four sequels/DLCs.

Something very different from others is Good Job!, an internship simulator where you need to complete tasks in an office in a chaotic setting where everything breaks and it's perfectly fine - even encouraged. You can either aim to be super fast and cause mayhem or avoid breaking things and take a more careful approach: both get awarded the same and offer very different approach to the tasks and puzzles.

Mountain biking is cool and Lonely Mountains: Downhill captures the fun of the sport with beautiful graphics and offers a great zen-like calm gameplay – or alternatively you can compete against yourself and try to find the best routes and optimizations to save that one tenth of a second from your record. It also has a DLC or sequel that I haven't played yet but look forward to.

Whether you liked Advance Wars games in the GBA era or haven't ever heard of them, Wargroove is worth checking out. It's a tactical warfare game with cute characters and a lot of depth. The single player story is great and challenging and the multiplayer gives unlimited amount of playability if you have a friend who likes the game as well. (and ps. Advance Wars 1+2 remakes are coming to Switch.)

And probably the most niche recommendation: Umurangi Generation. It's a photography game where you'll take photos of different things that you get tasked to take. I'm only in the second level yet as I've only played it twice but so far it's been a fun game. You might have to be a bit of photography enthusiast to enjoy the game though.

And if you like Metroidvania games, Hollow Knight should be on your Switch as well.

Which are your favorite games on Switch that I didn't mention on my recommendations? Let me know in Twitter.